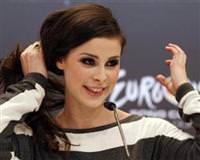 German teenager Lena will attempt to become the first Eurovision Song Contest winner to defend her title successfully on Saturday in the annual competition famous for light entertainment and heavy-duty kitsch.

A television audience of 125 million from the Atlantic Ocean to the Caspian Sea is expected to watch the 56th annual pop music competition that is, like the performing acts themselves, taken seriously in some places and lampooned in others.

Germany's Lena Meyer-Landrut, who won last year's contest in Oslo with a British-style pop song "Satellite," will be up against performers from 24 countries in Saturday's final (1900 GMT) after a field of 43 nations was reduced in two semi-finals.

While the Eurovision Song Contest is derided as a monument to mediocrity and bad taste in some countries, it has legions of enthusiastic followers in others -- especially in this year's host country Germany, where 2,500 journalists are covering it.

It has been a launching pad for international careers. Swedish pop group Abba became famous after winning in 1974 with "Waterloo" and Canada's Celine Dion took top honors in 1988 with "Ne partez pas sans moi" while competing for Switzerland.

A singer named Ruslana won for Ukraine in 2004 and was later rewarded with a seat in parliament.

From its start in Switzerland in 1956, the contest conceived by the European Broadcasting Union has grown into a giant event watched by millions in a glitzy live broadcast where spangly costumed performers belt out their songs in different languages.

Fans draped in their national flags or clad in outrageous outfits will pack the 36,000 seat arena in Duesseldorf and cheer the 25 finalists who will mix glitz and kitsch, ballads, rock 'n' roll and disco to try to win the highest number of votes.

Predictions on potential winners are notoriously wrong in many years because the outcome is determined -- partly -- by viewers from around Europe who call in their votes which are then awarded to the various acts on a scale of 12 to 0.

One of the most talked-about performers ahead of this year's contest, Stella Mwangi from Norway, was already eliminated in Tuesday's first semi-final round.

That has not dampened the enthusiasm of punters. Oddsmakers have identified Ireland's pop-rap duo Jedward, identical 19-year-old twins, as a hot favorite.

France's opera singer Amaury Vassili, a tenor, and Britain's boy band Blue are also tipped as favorites by bookmakers. As the main financiers of the contest, France, Britain, Spain, Italy and Germany get automatic spots in the final.

Lena, a fresh-faced 19-year-old, said she hopes for at least a spot in the top 10. She became an instant national hero a year ago for ending Germany's three-decade Eurovision drought that made many Germans anguish over why Europe so disliked them.

After winning Eurovision, "Satellite" went to the top of pop music charts in six nations and a top 10 hit in seven others.

Lena admits to being nervous about her title defense -- the first attempt since Corry Brokken of the Netherlands tried it. Brokken won in 1957 but was last in 1958.

"It's the same before going on stage or to a press conference: I'm totally impatient and want to start. Then the nervousness disappears. Waiting is always hard, my palms get sweaty, my legs go numb and my throat dries out. It's horrible."

History is against her. Only one performer won more than once: Ireland's Johnny Logan in 1980 and then in 1987. Ireland has the most wins (7), although the last victory was 15 years ago.

Some other famous participants in past contests include Julio Iglesias, Olivia Newton-John, Secret Garden, t.A.T.u., Lordi and Patricia Kaas. Riverdance was created in 1994 when Ireland hosted the contest.