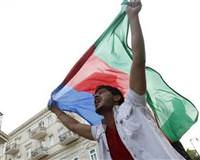 Azerbaijan's people and president praised their victorious Eurovision Song Contest duo on Monday and said the triumph has drawn attention of the world.

"We gained a historic victory on Eurovision, a victory of youth, the Azeri people and the state," President Ilham Aliyev said at the meeting with Eldar Gasimov and Nigar Jamal.

Gasimov, a 21-year-old student from the Caspian Sea nation's capital Baku, and Jamal, 30, a mother-of-two who lives in London, are known as Ell-Kikki.

Performing in Duesseldorf, Germany before a television audience of more than 100 million, they won the annual contest with "Running Scared," a ballad about a love-struck couple.

Azeris celebrated the victory, which came early on Sunday Baku time, by driving around Baku with national flags flying and singing and dancing in the streets.

"The whole world has learned about Azerbaijan and we will perform (at a) very high level of organizing (for) such an important international contest in 2012," said Elchin Muradov, a 25-year-old Baku resident.

The winning nation hosts the contest the following year.

Gasimov and Jamal laid flowers at a monument to late Azeri President Heydar Aliyev before meeting the president, who succeeded his father shortly before his death in 2003.

The European Union delegation in Azerbaijan congratulated the country on its "stunning performance."

"I am convinced that the organization of this event in 2012 in Baku will be a landmark event, which will draw an increased international attention to the country," Ambassador Roland Kobia, the head of EU delegation, said in a statement.