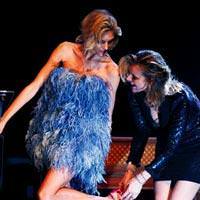 Mick Jagger, Russell Crowe and Jennifer Lopez were among the guests at AIDS charity amfAR's annual party during the Cannes film festival, which raised $6.7 million from a celebrity auction and seat prices.

The total was up from last year's $4.5 million but down on 2008's $10 million, and, as at other high-profile parties and dinners in and around Cannes this year, some guests grumbled quietly at the lack of A-list star power.

The black tie event, which lasted from Thursday evening into the early hours of Friday, was held in the grounds of the exclusive Hotel du Cap-Eden-Roc built by the sea just outside Cannes.

The 780 guests each paid anywhere between $4,000 and $20,000 for a three-course meal, wine and champagne and an after-dinner party around the swimming pool.

Regular host Sharon Stone was unable to attend and sent a video message instead, and those at last year's dinner recalled former U.S. President Bill Clinton making a keynote speech.

This year was low-key by comparison, although designers Tom Ford and Karl Lagerfeld walked the red carpet and singers Patti Smith and Mary J. Blige had people out of their seats and dancing.

They both agreed to play an encore when someone offered to pay $245,000 into the charity pot.

"As bananas as she is ... she also raises such a lot of money, she really knows how to bludgeon with glamour," he told Reuters on the red carpet. "So that's what I'm hoping to achieve tonight - bludgeoning with glamour."

The top individual lot at the auction was a photo shoot with Lagerfeld in his Parisian studio which fetched $735,000.

Two paintings by artist Richard Hambleton, described in the auction brochure as the "godfather of the street art movement", fetched a combined $920,000 and two bidders won a day out with Clinton costing $220,000 each.

The event was the 17th Cinema Against AIDS party held during the Cannes film festival, which this year runs from May 12-23.

Since 1993, Cinema Against AIDS events around the world have raised more than $50 million for AIDS research, amfAR said on its website.