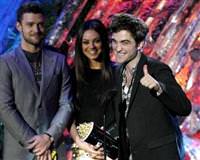 The MTV Movie Awards are turning into a free infomercial for the "Twilight" movie franchise.

For the third year in a row, the vampire romance was named best movie at the light-hearted -- and frequently X-rated -- salute to Hollywood's biggest crowd-pleasers.

"The Twilight Saga: Eclipse," which led the field with eight nominations, ended up with five awards. In a replay from last year Robert Pattinson and Kristen Stewart won for best male and female performance, respectively

The real-life couple won the award for best kiss, which Pattinson celebrated by running into the audience to smooch his co-star Taylor Lautner. Pattinson won an additional prize for best fight -- sharing the tub of gold popcorn with Bryce Dallas Howard and Xavier Samuel.

With categories such as those, nobody would ever confuse the MTV event with the self-congratulatory Academy Awards. The real point of the show is to promote upcoming buzzworthy movies targeted at MTV's youthful demographic.

Indeed a sneak preview screened of the fourth "Twilight film, "Breaking Dawn, Part 1," which opens Nov. 18. Other exclusive clips were shown of the supernatural thriller "Super 8," which opens Friday, and "Harry Potter and the Deathly Hallows, Part 2," which opens July 15.

The awards are determined by fans' online votes, which probably accounts for Justin Bieber's win in the best jaw dropping moment category for his 3D concert film "Never Say Never." The Canadian teen idol beat seemingly edgier scenes from such films as "Black Swan" and "127 Hours."

The producers of "The Social Network" probably will not lose too much sleep wondering why Aaron Sorkin's Oscar-winning script lost the best line from a movie category to the critical bomb "Grown Ups." The winning quote, "I want to get chocolate wasted," was uttered by child actress Alexys Nycole Sanchez.

Ribald humor was the order of the night, thanks largely to host Jason Sudeikis. The "Saturday Night Live" comic directed a joke about oral sex to a mortified Selena Gomez, Bieber's 18-year-old girlfriend.

He also referenced the alleged nude photos circulating online of presenter Blake Lively when he introduced "what I believe is the real Blake Lively, but she won't confirm it."

The "Gossip Girls" actress, who has denied the self-portraits are of her, came backstage to pose for photos, but refused to answer any questions.

Other nonfamily-friendly moments saw Justin Timberlake grabbing Mila Kunis' breasts. She reciprocated by grabbing his crotch. The daredevil stars of "Jackass" made homoerotic references to Donald Trump, and footage screened of dogs engaging in sex.