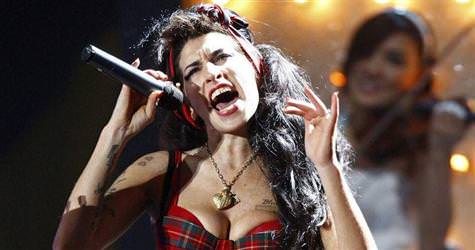 Winehouse, 27, sporting her trademark bouffant hairdo and figure-hugging dress, struggled to perform her songs and keep her balance as her band gamely played on. On some tunes, the audience did most of the singing.

On other occasions, Winehouse lectured her bandmates, and anxiously clutched her arms. She appeared to be reading the lyrics from a teleprompter. The singer was headlining a Serbian festival, whose lineup included techno singer Moby.

A representative said upcoming festival dates in Istanbul on Monday and in Athens on Wednesday would be canceled. Her next show is scheduled for July 8 in Spain.

Amy Winehouse was due to play the Küçükçiftlik Park Monday evening. Ticketholders may contact biletix.com for information regarding reimbursement.

"Despite feeling sure that she wanted to fulfill these commitments, she has agreed with management that she cannot perform to the best of her ability and will return home," a statement said. "She would like to apologize to fans expecting to see her at the shows but feels that this is the right thing to do."

Belgrade media and fans heaped abuse on her in the aftermath of the show. One fan, writing on Winehouse's website, described her as "another punkass junkie and lush."

Another took a more sympathetic view. "I was there, and it was (a) sad thing to watch. Shame on her management, to allow her on stage in that state. She's not to blame -- she needs help."

Winehouse has been getting help for years as she struggled with addiction. She rose to mainstream fame in 2006 with the hit single "Rehab," and won four Grammys awards in 2008 including best new artist and album of the year. She was unable to attend the ceremony in Los Angeles because of legal problems, and she is yet to release a follow-up recording.