Enjoying Bodrum on a mega yacht 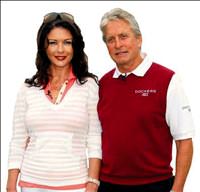 Hollywood couple Catherine Zeta-Jones and Michael Douglas is vacationing in Bodrum on a 61-meter long yacht they rented for 310,000 Euros.

Famous American actor Michael Douglas and his actress wife Catherine Zeta-Jones are currently vacationing in Turkey. The Hollywood stars, which were cruising to Greece, made a pit stop in Bodrum due to the harsh weather conditions. The couple was headed to the Greek islands when a wind storm forced their boat to change course and to stop in Bodrum. Sunday night, they anchored in the Milta Bodrum Marina and spent the evening wandering around Bodrum as well as doing 400 liras worth of shopping. It is yet unclear how long the Hollywood couple plan to remain in Bodrum, however yesterday they spent the day on their boat. During the midday hours, Michael Douglas was spotted inside the yacht.
The yacht the stars have rented is called the "Mary Jean II" and stands 61-meters long. The weekly rental price topples 310,000 Euros (724,999 TL) and it has seven cabins that accommodate 12 passengers.
The 2010 make boat is operated by 14 crew members and competed in the 2010 World's Best Boat competition. There is absolutely no bargaining room on the price for the boat, which can only be rented out by 21 authorized agencies. At present, the boat is only free for one week in October; otherwise, it is fully booked for the summer.