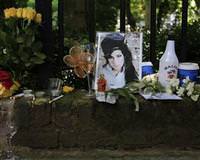 The family of Amy Winehouse sought "privacy" from the public eye on Sunday, one day after the young, beehive-haired soul singer's untimely death, which sent fans rushing to download her songs in remembrance.

The "Rehab" singer was found dead at her London home on Saturday, becoming the latest in a grim tally of music superstars who died at the seemingly cursed age of 27.

"Our family has been left bereft by the loss of Amy, a wonderful daughter, sister, niece. She leaves a gaping hole in our lives," her family said in a statement. "We are coming together to remember her, and we would appreciate some privacy and space at this terrible time."

Police say it is too early to speculate on how Winehouse died and a post mortem will not be conducted before Monday morning, but Winehouse's struggle with alcohol and drug addiction were well documented.

Her best known song, the booming "Rehab," from 2006 album "Back to Black," bore witness to her doomed struggle to get clean. Other members of what has been dubbed the "Forever 27" club include Jimi Hendrix, Janis Joplin, Jim Morrison and Kurt Cobain, who died at that age in different circumstances after chaotic lifestyles associated with rock'n'roll careers.

"The thing that links them together is the fact that all of them have been pop cultural shifters, all of them have helped push the sound of modern music to new levels, and some of them have pushed it on a very large scale, be it Amy Winehouse, Jimi Hendrix, Brian Jones," said Eric Segalstad, author of "The 27s: The Greatest Myth of Rock & Roll".

In many cases the musicians' posthumous fame has surpassed the success they enjoyed in their career, with their recordings still selling and enjoyed by a new audience.

That may be the case for Winehouse, considered by some as among the most talented singers of her generation, who leaves only a slim set of recordings showcasing her talent.

Winehouse occupied top slot on the iTunes UK download chart 24 hours after her death with "Back to Black," the album that won five Grammy awards in the United States and turned the troubled north London girl into an international star.

"Back to Black," knocked fellow female British vocalist Adele's "21" off top spot on the iTunes chart.

Her death came too late to influence the top 40 chart of downloads and disc sales released by the Official Charts company Sunday, but she is likely to top the list next week.

Sales of Winehouse's albums increased by 37 times between Friday and Saturday, with track sales up by 23 times, the Official Charts Company said. "We would expect an even bigger impact to roll through over the coming days," said Official Charts managing director Martin Talbot.

The sales surge mirrors the 2009 example of Michael Jackson, whose songs leapt to the top of the charts after his death.

Jackson's estate is estimated to have generated more than $310 million from album sales and spin-offs since the "Thriller" singer died two years ago. Jackson also struggled with drug addiction during his life, and his death was caused principally by an overdose of a powerful anesthetic, propofol.

Winehouse slid from being a chirpy teenage singer from a north London Jewish family to someone who could barely walk at her final concert performance in Serbia.

She won critical acclaim after the release of her debut album "Frank" in 2003 before becoming a worldwide phenomenon with the success of "Back to Black."

"It was between the two albums that she went off the rails, partly in reaction against the fame. And I think she was quite scared of her talent," biographer Chas Newkey-Burden told British broadcaster Sky News.

While Winehouse had been regularly recording songs, she had not released a new album since "Back to Black."

Her spokesman said it was unclear what use would be made of her unreleased recordings. But a posthumous album would seem inevitable given her huge popularity.

"She constantly wrote music, that's what she did. There are lots of demos knocking around and all sorts," the spokesman said.