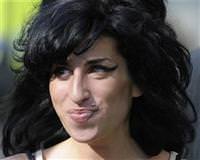 The "Rehab" singer whose problems with substance abuse were well-documented, died at her home in London, and while it appears she has lost her battle with drink and drugs, an official cause of death has yet to be determined.

Nevertheless, fans speculated that she became another in a long list of singers, actors and other celebrities whose problems in the public limelight led to their demise -- Kurt Cobain, Janis Joplin, Jimi Hendrix, Heath Ledger.

Winehouse was the top trending topic on Twitter where many tweets read like this one from gigglinben: "meh hate waking up to hear #amywinehouse is gone...dreaded it for ages...so young & so much talent sadly gone..hope she finds peace"

CRIerPourMoi posted: "her beautiful voice will be sorely missed. so unfortunate her disease got the best of her. RIP..."

The British singers' talent was discovered when she was 16, and her debut album "Frank" in 2003 earned acclaim. But it was her second CD, 2006's "Back to Black" that made her a star.

The record produced a string of memorable tunes, including "You Know I'm No Good," "Love Is a Losing Game" and "Rehab," which contained the line: "They tried to make me go to rehab. I said 'no, no, no.'" The album reached No. 1 in Britain and earned Winehouse five Grammys, pop music's highest honors.

Ronson, the "Back to Black" producer, tweeted that Winehouse "was my musical soulmate & like a sister to me. this is one of the saddest days of my life."

Indeed, Twitter was alive with tributes from a who's who of the music world. Rapper and media mogul Diddy said "RIP Amy Winehouse" on the social network website and rocker Pete Wentz sent out "super sad to hear about the news. RIP. never take life for granted."

Some tweets had a harsher tone, such as this from mattissotrendy: "It's sad when anyone dies, but I find it hard to respect a drug addict. No matter how talented they were".

But singer/songwriter and Matchbox 20 frontman Rob Thomas sought to pour cold water on many of the more sarcastic remarks by tweeting, "So many people saying that because it's not a surprise that Amy Winehouse passed, it's not sad. I hope you have more compassion for friends."

"I am deeply saddened to learn of her tragic passing. She was an extraordinary musician with a rare intuition as a vocalist and I am truly devastated that her exceptional talent has come to such an early end," Bennett said.

The U.S.-based Recording Academy, which gives out the Grammys, also issued a statement calling Winehouse "a dynamic performer and musician who seamlessly blended rock, jazz, pop, and soul and created a sound all her own."