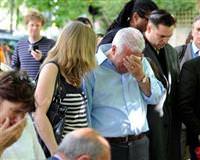 The memorial service for the late singer Amy Winehouse was held Tuesday morning in London at Edgwarebury Cemetery and ended with her father, Mitch Winehouse, saying, "Good night, my angel, sleep tight."

A family spokesman told NBC News that Mitch Winehouse also "told some great stories from [Amy's] childhood about how headstrong she was, and clearly the family and friends recognized the stories and laughed along."

Also read: Amy Winehouse: 'I'll Be Dead in a Ditch, on Fire'

Among the mourners were Kelly Osbourne (at right in the photo) and producer Mark Ronson. The service was led by Rabbi Frank Hellner and conducted in English and Hebrew.

The troubled neo-soul artist, most famous for her 2007 hit "Rehab," died Saturday at her home in London at the age of 27. The cause of death has yet to be determined and the results of a toxicology report are pending.