Film viewing fun along the Bosphorus! 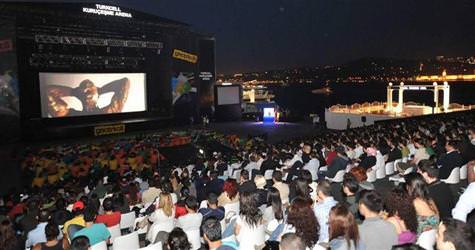 Watch Horrible Bosses, the latest film to star Golden Globe and Emmy award-winning actress Jennifer Aniston, for some black humor under the stars!

Over the past few weeks, thousands of movie-goers have been watching a number of newly released films such as 'Harry Potter and the Deathly Hollows', 'Rise of the Planet of the Apes' and 'The Smurfs' under the stars in an open-air movie theater situated along the Bosphorus at the Turkcell Kuruçeşme Arena. This Tuesday, August 16th, 'Horrible Bosses' will be the newest selection shown.
The film's synopsis: What if your boss is a psychopath, a man-eater or simply a complete tool, what do you do? Three friends, perhaps under the influence of too many drinks or maybe due to a suggestion made by a former convict, proceed to devise a plan to save the world from 'horrible bosses'.
The doors to the Turkcell Kuruçeşme Arena open at 19:00. Despite the film showing at 21:00, film lovers have been going early in order to enjoy the thrill of being on the Bosphorus. In addition, gnctrkcll customers who check-in on Facebook will instantly win a free t-shirt! In addition Turkcell, with the Film Kulağı, Artizim, Film Bill and Kafa Sesi competitions, are looking forward to meeting young competitors that are confident in their knowledge of films and talent.
Tickets can be purchased instantly through Turkcell's Mobile Payment option!
In addition, gnctrkcll customers are also eligible to benefit from the "Buy one ticket, get one free!" campaign for films shown at this prime location under the stars along the Bosphorus.
Gnctrkcll customers will be able to pay 10 TL for two tickets, while the regular cost is 15 TL for one ticket to watch a newly released film in one of the best locations along the Bosphorus.
Tickets can eb purchased from TurkcellMobilÖdeme, Biletix, gencteklif.com or the Turkcell Kuruçeşme Arena ticket booths.
For details: www.gnctrkcll.com