There’s no stopping for Turkish cinema 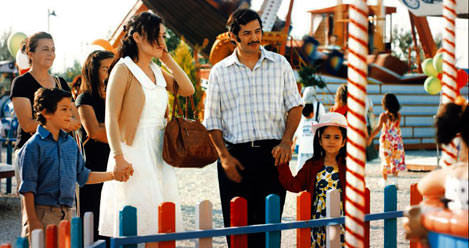 This year at the Montreal World Film Festival the spotlight will be on Turkish films. A total of seven Turkish films will be showed at the festival, two of which are up for an award.

Turkish cinema continues to run from success to success in the international arena. After a good showing at the Cannes Film Festival and the Sarajevo Film Festival, it appears Canada will now be the next to see a selection of Turkish films. From August 18th to the 28th, the Montreal World Film festival will be showing a total of seven Turkish films, two of which will be competing.
This year, at the 35th Montreal World Film Festival, expert director Derviş Zaim's latest film Gölgeler ve Suretler (Shadows and Faces), which deals with the Cyprus incident, will be showing in the World Greats Section. Selected by the 22nd Ankara Film Festival for Best Film and Best Screenplay, Gölgeler ve Suretler is Derviş Zaim's final link to the Cenneti Beklerken and Nokta , 'Traditional Turkish Arts' series. The film takes place in 1963 and depicts the events that transpired in Cyprus through the eyes of a puppeteer father who is separated from his daughter.
The Eylül and Vücut films will be representing Turkey at the festival in the First Films World Competition. Eylül, which is photographer Cemil Ağacıkoğlu's first film, depicts a sad love story. Vücut on the other hand, directed by Mustafa Nuri, with actors Hatice Aslan, Hakan Kurtaş and Cengiz Bozkurt, tells the story of a 40-year-old porn star. After debuting in Montreal, both of these films will go on to compete in the 18th Adana Altın Koza Film Festival.

ONE CATEGORY, FOUR FILMS
Four Turkish films will be showing in the Montreal World Film Festival's World Cinema Perspective category. The first, Hayda Bre, was awarded for Best Film at the 14th Shanghai International Film Festival. Directed by Orhan Oğuz, Hayda Bre stars Şevket Emrullah and Nilüfer Açıkalın. The film tells the story of a family migrating from Macedonia to Turkey. Oğul, a film written by young director Atilla Cengiz and shown at the Istanbul Film Festival, is a drama in which two fathers find their sons dead. Another significant film released in 2011 is entitled Press, which deals with events that transpired in the Diyarbakır office of the Özgür Gündem newspaper. Atlıkarınca, starring Mert Fırat and Nergis Öztürk, is director İlksen Başarır's second film and will also be representing Turkey in the World Film Perspective Section.