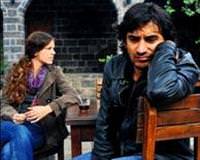 Directed by Özcan Alper, the world premiere of the film 'Gelecek Uzun Sürer' (The Future Lasts Forever) will be held at the 36th Toronto Film Festival on September 8th to the 16th.

AWARD-WINNING DIRECTOR
The film's premiere in Turkey will be held from September 17th to the 25th in the 18th Adana Altın Koza Film Festival full-length feature competition after it shows in the Toronto Film Festival's Contemporary World Cinema category.
Özcan Alper won over 30 awards both in Turkey and internationally for his first film 'Sonbahar'(Autumn). The production of his second film, 'Gelecek Uzun Sürer' (The Future Lasts Forever) was done by Nar film in conjunction with the German production company Unafilm and France's Arizona Films.
The film depicts a doctoral student in Istanbul who takes a journey to the southeast in order to research a collection of elegies. The film will be released in November and stars Gaye Gürsel, Durukan Ordu, Sarkis Seropyan and Osman Karakoç.