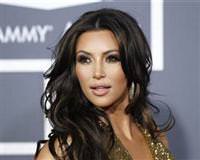 Kardashian, 30, one of the highest-earning reality TV stars, and New Jersey Nets player Humphries, 26, exchanged vows in a ceremony on a private estate in the Southern California hill town of Montecito, her spokeswoman told People magazine and E! television.

People magazine bought exclusive rights to the wedding, which is also being filmed as a two-part special called "Kim's Fairytale Wedding: A Kardashian Event" to be broadcast in October on E! television.

Kardashian, who stars with her three sisters and their mother in "Keeping Up with the Kardashians," began dating Humphries in late 2010 and he proposed in May with a whopping 20.5 carat diamond ring.

The family and U.S. celebrity media have since talked and tweeted about little else than preparations for the wedding. The 440 guests on Saturday included "Desperate Housewives" actress Eva Longoria and Lindsay Lohan, People said.

Kardashian wore an ivory, lace-trimmed gown designed by Vera Wang, People said. She is widely reported to have wanted her cake in the same style as Britain's Prince William and Kate Middleton, who married in April.

Kardashian is thought to be the highest-paid reality star on U.S. television with 2010 earnings estimated at $6 million from the show and its two spinoffs, her clothing line, perfume, jewelry, tanning cream and other product endorsements and paid appearances.

Saturday's wedding was the first for Humphries and the second for Kardashian, whose 2000 marriage to music producer Damon Thomas ended in divorce in 2004 -- three years before "Keeping Up with the Kardashians" started its TV run.

Kim Kardashian is the daughter of the late attorney Robert Kardashian, a member of the legal defense team for football player O.J. Simpson during his trial and sensational acquittal on murder charges in 1995.