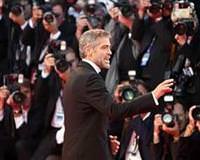 The Venice film festival has rediscovered its movie mojo this year, putting high costs and growing competition from Toronto aside to provide a line-up full of hotly anticipated titles and big Hollywood stars.

George Clooney, a regular favorite on the Lido island where the world's oldest film festival is held, kicks off the glamorous 11-day event on Wednesday with "The Ides of March," a political drama which he also directed.

"I don't recall a time when so many people have been so excited by a line-up and that is across the board," said Jay Weissberg, film critic for Hollywood trade publication Variety who is a Venice festival regular.

"There's a nice Hollywood contingent which is composed of directors and stars like Clooney who appeal to a very broad range of both festival insiders and the general public," he said. "But it is more than just Hollywood."

Film makers from around the world will descend on the canal city from August 31 to September 10 to showcase their movies, and attend a whirlwind of photocalls, press conferences, interviews and parties.

Blockbusters rarely feature, but a slot in Venice is coveted by lower-budget U.S. productions for the exposure it brings and because it acts as the unofficial launch of the annual awards season ending with the Oscars.

Venice overlaps with the Toronto film festival, regarded by Hollywood as a cheaper alternative and featuring many of the same movies, but Venice director Marco Mueller has put together a program that should eclipse 2010's worryingly low-key edition.

The film, directed by Sweden's Tomas Alfredson, is one of 22 in the main Venice competition, and has already won the blessing of the British author whose "The Constant Gardener" also made it to the big screen.

"It's not the film of the book," Le Carre said in remarks carried on his website.

"It's the film of the film, and to my eye a work of art in its own right. I'm very proud to have provided Alfredson with the material, but what he made of it is wonderfully his own."

In "A Dangerous Method," Canadian David Cronenberg explores the rivalry between Carl Jung and Sigmund Freud as a young woman (Knightley) comes between them.

Roman Polanski worked on the screenplay for his latest movie "Carnage," featuring Winslet, Jodie Foster and Christoph Waltz, while under house arrest in Switzerland last year.

The 78-year-old was eventually freed after the Swiss authorities decided not to extradite him to the United States, where he is still wanted for sentencing for having sex with a 13-year-old girl in 1977 in Los Angeles.

Acclaimed Russian director Alexander Sokurov brings "Faust" and Hong Kong's Johnnie To presents "Life Without Principle," a story touching on the economic crisis and its effect on ordinary people.

Outside the main lineup, Madonna makes her second foray into feature films with "W.E.," a drama loosely based on divorcee Wallis Simpson whose relationship with King Edward VIII led to his abdication in 1936.