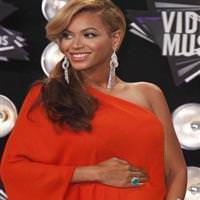 R&B singer Beyonce let pictures tell the story of a baby on the way for her and rapper husband Jay-Z at the MTV Video Music Awards on Sunday.

She first appeared before photographers, telling them she had a surprise and outlining a baby bump under her long gown.

Then the singer, whose hits include "Beautiful Liar" and "Single Ladies (Put a Ring on it), appeared onstage to perform her song "Love On Top," telling the audience to stand up. "I want you to feel the love that's growing inside of me," she said.

At the end of her song, she took off her jacket, smiled broadly and rubbed her tummy. In the audience, her husband and rapper Jay-Z was congratulated by his friend and collaborator Kanye West and he gave Beyonce a big wave.

A spokeswoman for Beyonce was not immediately available for comment.

She and Jay-Z began dating in 2002 and were married in April 2008. For years, her many fans and the media have speculated about whether and when they might have a baby.