007 James Bond to return to Turkey 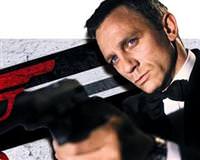 After visiting the country in the films ‘From Russia with Love’ and ‘The World is not Enough’, James Bond is now planning to come back to Turkey once again. An application has been made to the Ministry of Culture to shoot a portion of the agent’s new film, Bond 23 in Istanbul.

Now, years later, it appears the famous English agent James Bond wants to return to Turkey. James Bond has stepped foot in Istanbul twice prior and it appears he may soon be returning to shoot a portion of his new film Bond 23 in Istanbul. The film's producers have applied to the Ministry of Culture and Tourism to acquire permission to shoot scenes for Bond 23 in Sultanahmet Square. Ministry of Culture and Tourism Ertuğrul Günay has confirmed that the producers of Bond 23 have indeed applied for permission to film. Günay points out however that Sultanahmet is a difficult location, "It is always bustling. We are trying to create an environment in which will not offend visiting tourists."
BOND 23 TO BE RELEASED IN 2012
Oscar-winner Sam Mendes will be directing the film starring Daniel Craig as James Bond. The film has already signed Ralph Fiennes, Javier Bardem, Naomie Harris and Judi Dench. Bond 23 was a project intended to be taken on by MGM, however due to the economic crisis the company is faced with, they postponed filming last year. SONY Pictures then came into play and signed an agreement to shoot two new Bond films, including Bond 23, the filming of which was brought forward. The film is expected to be released in 2012.

BOND HAS BEEN TO TURKEY TWICE
The fictitious agent created by author Ian Fleming, began his cinematic adventure with the 1962 production Dr. No starring Sean Connery. The adventures of James Bond have become the subject matter of 22 films. Over 1.5 billion people all over the world have viewed Bond films. The famous agent has been in Istanbul twice thus far in the 1963 film From Russia With Love and in the 1999 production The World is Not Enough.

' WE MAY SET UP INCENTIVES FOR HOLLYWOOD FILMS'
According to Minister of Culture and Tourism Ertuğrul Günay, they intend to establish an incentive system for Hollywood films to shoot in Turkey, however the issue has gotten stuck at the Ministry of Finance. Günay states "When Nicholas Cage met with the Prime Minister, they discussed the issue of implementing incentives. Erdoğan had stated that he would look into the issue; therefore the option may arise again. Efforts were made in regarding to setting up incentives." Günay also stated that there were efforts to set up a filming set in Kocaeli on the formed SEKA property and that the project was organized by the local municipality.