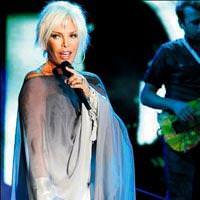 This summer’s concert series organized by BKM and held at the Turkcell Kuruçeşme Arena continues on at full speed.