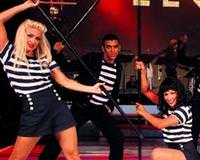 As of September 29th the TIM Show Center in Istanbul hosts “Rock Around the Clock" where audiences will have the chance to listen to unforgettable Rock and Roll classics from the 1950’s.

Istanbul's famous TİM Show Center is getting ready to kick off the 2011- 2012 season with a series of new shows. Known as the biggest and best 1950's show of all time, "Rock Around The Clock," performs for fans from September 29th to October 2nd. Bringing together incredibly talented singers, dancers and musicians, "Rock Around the Clock" provides a performance of back to back Rock and Roll classics. Those who come out to see the show will be able to participate by dancing to the popular tunes. Referred to in the U.S. press as 'A Rocking, rolling, rollercoaster of a show!" this group show is reminiscent of a music box which travels all over the world. The show includes performances of popular songs by the likes of Buddy Holly, Bill Haley and His Comets, Chuck Berry, Fats Domino, Elvis Presley, The Platters and Jerry Lee Lewis such as Great Balls of Fire, Jail House Rock, Blueberry Hill, Shake Rattle and Roll, Good Golly, Miss Molly, Johnny B. Goode as well as a number of other unforgettable tunes.