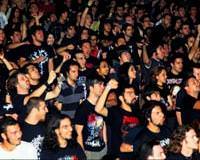 Israeli heavy metal is rocking Turkey despite deep discord between the Jewish state and its Muslim former ally as hundreds of fans turned out to hear a group called Orphaned Land play a concert in Istanbul.

The group played to Turkish fans and others who came from countries across the Arab world on Saturday. Because the Israeli musicians can't enter many Arab states, they perform several times a year in Turkey, a hub for their fans.

Ankara has downgraded diplomatic relations with Israel and suspended defense trade after the Jewish state's confirmation last week that it would not apologize for its deadly 2010 assault on a boat challenging its Gaza blockade in which nine Turks were killed.

Band leader Koby Farhi, interviewed in Bat Yam, south of Tel Aviv, on Wednesday, said music had the power to transcend political differences and his group was able to connect with people who would usually take an automatic anti-Israel stance.

The group initiated a brand of music it called "Jewish-Muslim metal" that is derived from heavy metal. Many of the band's songs include prayer lyrics from Jewish liturgy, the Koran and other religious texts.

Farhi said there are hundreds of groups who play a similar genre operating out of sight of the authorities, mainly in more moderate Arab countries. Later this year Orphaned Land will tour Europe with metal bands from Algeria and Tunisia, he said.

The group is also considering holding a concert in Egypt after a Facebook poll showed that 83 percent of their fans said they should.

In Istanbul on Saturday, Orphaned Land's fans were not disappointed. Some came all the way from Iran and Lebanon, waving their national flags.

"Music doesn't recognize closed doors. Once again, this has proven to be true. I believe all people here are supporting them and their performance is really good," one Turkish fan told Reuters.

"It takes courage to do what they are doing, coming here and performing for us. We will always be here with them and sing with them," another said.