R.E.M. Announces the End of the Dream 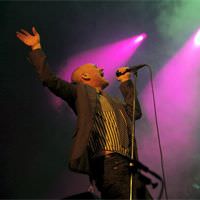 Michael Stipe and the rest of R.E.M. have put the band to sleep.

The group, which began to rise through the indie-rock ranks in the early '80s before gaining international stardom, announced the split on their official web site Wednesday.

"To our fans and friends: As R.E.M., and as lifelong friends and co-conspirators, we have decided to call it a day as a band," the group said in the announcement. "We walk away with a great sense of gratitude, of finality, and of astonishment at all we have accomplished. To anyone who ever felt touched by our music, our deepest thanks for listening."

No specific reason for the split was cited, though in individual statements the members of the group suggested that the band had simply run its course.

"We've made this decision together, amicably and with each other's best interests at heart," bassist Mike Mills said. "The time just feels right."

Added singer Michael Stipe: "A wise man once said, 'The skill in attending a party is knowing when it's time to leave.' We built something extraordinary together. We did this thing. And now we're going to walk away from it."

R.E.M. was originally a quartet, but had been operating since 1997 as a trio with the departure of drummer Bill Berry.

The band released its 15th studio album, "Collapse Into Now," in March, which peaked at No. 5 on Billboard's charts, debuting with sales of 57,000 units.

For a multi-platinum, multi-Grammy-winning band from Athens, Ga., which was as popular with rock critics as it was with its typically colleage-educated fans, it was a quiet ending.

The group formed in 1980, when Stipe began regular conversations with guitarist Peter Buck, while the latter was working at an Athens record store. They quickly recruited University of Georgia students Mills and Berry and formed the band.

Throughout the 1980s, the band continued to grow its critical acclaim and heavy college-radio airplay. After several albums on the independent label IRS, the band signed to Warner Bros. and scored numerous global hits, including "Stand," "Losing My Religion" and "Everybody Hurts."