A wind of Cem Adrian in October 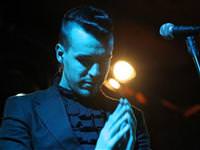 With 15 concerts scheduled for October, a wind of Cem Adrian’s songs will be blowing through the entire nation!

Having performed numerous concerts throughout Turkey as well as internationally, Cem Adrian will be playing a selection of songs from albums, "Ben Bu Şarkıyı Sana Yazdım", "Aşk Bu Gece Şehri Terk Etti", "Essentials / Seçkiler", "Emir" as well as his fifth album "Kayıp Çocuk Masalları". Tickets for Adrian's concerts can be purchased from Biletix, Mybilet as well as from the concert venues.