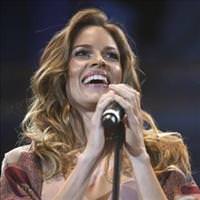 Double Oscar winner Hilary Swank said on Thursday that she "deeply regrets" attending a birthday celebration last week in Chechnya for a leader accused of orchestrating torture and other human rights violations.

Swank, 37, was one of a number of celebrities who traveled to the Chechen capital Grozny to attend a glitzy opening ceremony for a skyscraper complex that coincided with the 35th birthday of regional strongman Ramzan Kadyrov.

"I deeply regret attending this event, which has thrown into question my long and deeply-held commitment to the protection of human rights," Swank said in a statement.

Swank gave Kadyrov birthday wishes at the ceremony and told him "people are better dressed here than in New York." When asked by a Russian host if she knew it was Kadyrov's birthday, she said: "I do my research, I study what is going on here."

The "Million Dollar Baby" actress said on Thursday she agreed to go because the project was described to her as a symbol of hope, and that she had been requested by organizers on the day to wish Kadyrov a happy birthday.

She added she was unaware of Kadyrov's policies that human rights groups say promote fear, abductions, and executions of those involved in Chechnya's Islamist insurgency.

"I would never intentionally do anything that raised doubts about such commitment. I will continue to donate my time and my financial resources not only to the charities with which I am currently affiliated, but also those dedicated to the preservation of human rights," Swank said.

The Berlin-based European Center for Constitutional and Human Rights said it had written an open letter to all the entertainers before the event asking them not to attend.

Human Rights Watch has urged the celebrities to return any money or gifts they may have received for attending the celebration.

Swank won best actress Oscars for her roles in "Boys Don't Cry" and "Million Dollar Baby" and also starred in romantic drama "P.S. I Love You" and "Amelia".