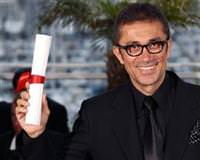 The AFI Fest, which is presented by Audi, released the names of 28 new films and 35 shorts. The new list of films had been preceded by several other programing announcements, including galas and special screenings; the festival has now revealed all of its programing except for selections made by its guest director, Pedro Almodovar, which will be announced next week.

The new batch of films includes 11 U.S. or world premieres, and four films that were submitted by their home countries in the Oscar Foreign-Language Film category: Israel's "Footnote," Turkey's "Once Upon a Time in Anatolia," Iran's "A Separation" and Hungary's "The Turin Horse."

Also included in the lineup is "The Forgiveness of Blood," an Albanian-language drama from U.S.-born director Joshua Marston that was submitted by Albania but disqualified by the Academy's foreign-language committee for having too much creative input from outside that country; "This Is Not a Film," from imprisoned Iranian filmmakers Jafar Panahi and Mojtaba Mirtahmash; and "Alps," another twisted tale from the Greek director of the controversial Oscar nominee "Dogtooth."

The festival also announced four Breakthrough films that were discovered through its submission process, and three Midnight selections for its late-night programing.

Of the 35 shorts that will screen at the festival, three are from the AFI Conservatory's classes of 2010 and 2011.

The festival will take place from November 3-10 in Hollywood at the Chinese and Egyptian theaters and the Hollywood Roosevelt Hotel.

The names of the short films, and of the previously announced Galas, Special Screenings, New Auteurs and Young Americans programs can be found at the festival web site.

Passes for the festival are available at the web site; free tickets to all screenings will be made available to the public on October 27, after a 24-hour window in which AFI members can obtain the tickets.