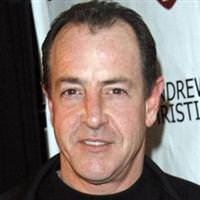 Actress Lindsay Lohan's father Michael Lohan was jailed in Florida on Tuesday on a domestic battery charge after his girlfriend accused him of threatening to throw her off a balcony, police said.

The 51-year-old Lohan, who recently appeared on VH1's Celebrity Rehab, told police in Tampa that he never put his hands on the woman.

Two officers responded to a domestic violence call at an apartment, where Kathryn Major told them she and Lohan had argued about a restraining order she had against him.

Major, 28, said she and Lohan had lived together on and off for two years but currently were not together. She said that she let Lohan stay with her after he came to the apartment Sunday night, according to the police report.

Major said Lohan became violent, yelling at her about an upcoming court hearing for the restraining order and for refusing to engage in oral sex. She said he threw the remote control at her but missed.

Lohan admitted breaking Major's cell phone during a verbal argument but said he would never hurt her, police said.

He told police the couple had just moved to Tampa to escape the publicity surrounding his daughter Lindsay Lohan. Last week, a judge in Los Angeles revoked the "Mean Girls" actress' probation because she failed to perform community service ordered as part of her sentence for stealing a gold necklace from a jewelry store.

The jail report listed a home address for Michael Lohan in Fort Lauderdale and his occupation as marketing director of a pharmaceutical company.

Lohan complained of chest pains after he was arrested early Tuesday and was taken to a hospital.

"He was hoping this would prevent him from going to jail, and in fact signed himself out of the hospital soon after he thought the police left," the report said.