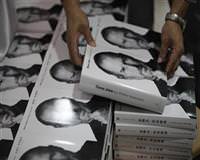 The biography of late Apple Inc. co-founder Steve Jobs' hit the bookstores on Monday, and reviewers wasted little time in heaping praise on the much-anticipated book destined for the bestseller list.

The New York Times called Walter Isaacson's "Steve Jobs," which Simon & Schuster published earlier than planned following of Jobs' death from pancreatic cancer on October 5, clear and concise, saying it "does its solid best to hit" its target.

"Here is an encyclopedic survey of all that Mr. Jobs accomplished, replete with the passion and excitement that it deserves," wrote New York Times reviewer Janet Maslin.

Isaacson, the onetime editor of Time magazine and author of biographies on Albert Einstein and Benjamin Franklin, "has given us a nuanced portrait of the brilliant, mercurial, complicated genius," said Entertainment Weekly's Tina Jordan of what she called the "occasionally workmanlike ... thoughtful, broadly sourced" book.

"Isaacson has taken the complete measure of the man. This is a biography as big as Steve Jobs," Jordan concluded.

The Washington Post lauded the book for its scope -- "on the one hand a history of the most exciting time in the age of computers," and "a textbook study of the rise and fall and rise of Apple," as well as "a gadget-lover's dream."

"But more than anything," wrote the Post's Michael Rosenwald, "Isaacson has crafted a biography of a complicated, peculiar personality" which succeeded in showing how Job's character shaped great technological innovations.

Like others, the Huffingtonpost's Barbara Ortutay gave Isaacson's book credit for taking off "the rose-colored glasses that often follow an icon's untimely death," calling the book "a rich portrait" -- if one that could have used "another round of editing" in the rush to publish.

At ABC News, former Clinton White House staffer George Stephanopoulos praised Isaacson for having "pulled no punches in this book," such as characterizing Jobs as sometimes being very tough, even mean.

"This is a fascinating character study," Stephanopoulos enthused.

Of the 22 amateur reviewers on Amazon.com, the vast majority agreed with the pros, with 18 giving it a highest-possible five stars, while only three tarred the book with a lowly one-star rating.