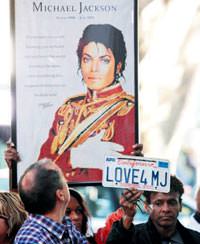 Michael Jackson's personal doctor was found guilty on Monday of involuntary manslaughter in the pop star's drug-related death in 2009 but may not spend much time in jail.

Dr. Conrad Murray, 58, was led away in handcuffs after the jury in Los Angeles reached a unanimous verdict. Dozens of fans outside the court erupted in cheers and some burst into tears.

"Justice was served. Michael is with us," said Jackson's brother Jermaine.

Murray faces up to four years behind bars when he is sentenced on November 29 but may spend only months in Los Angeles' overcrowded cells.

Murray pleaded not guilty to giving the "Thriller" singer a fatal dose of the powerful anesthetic propofol -- normally used in surgery -- that was ruled the main cause of his death at the age of 50.

The judge ordered Murray, who had been free on bail for two years, held in custody until his sentencing. The doctor did not testify at the six-week trial and looked impassive as the guilty verdict was announced in the packed courtroom.

Jackson's mother Katherine and sister Rebbie cried silently at the result. Other family members in court included his siblings La Toya and Randy, along with his father Joe.

"I am," Katherine Jackson said when reporters asked if she was pleased with the verdict.

Jackson was found lifeless at his Los Angeles mansion on June 25, 2009, about three weeks before he was due to begin a series of concerts in London aimed at returning him to the limelight after the humiliation of his 2005 trial and acquittal on child molestation allegations.

Murray admitted giving Jackson a small dose of propofol to help him sleep. But his lawyers argued the singer was dependent on the drug and likely gave himself an extra, fatal dose -- and swallowed a handful of sedatives -- without Murray knowing.

Murray's lawyer J. Michael Flanagan was asked by reporters if he was disappointed and he replied: "Of course."

Prosecutors said Murray was negligent for administering the drug in a home setting, failing to monitor Jackson, delaying a call to emergency services and failing to tell medical personnel he gave the singer propofol.

Judge Michael Pastor said Murray was "now a convicted felon who has been deemed the causative factor in Michael Jackson's death."

Pastor said the doctor should be detained before being sentenced to protect public safety.

Even if Murray is sentenced to the maximum four months, legal experts said involuntary manslaughter is not considered a serious felony in California law and carries a stipulation that only 50 percent of any sentence must be served behind bars.

Because of jail overcrowding, officials could release him after only months.

"It's pretty obvious by putting him in custody, which was the biggest surprise of the entire trial, that we're probably looking at a sentence of three to four years," Stan Goldman, a professor at Loyola Law School, told Reuters.

But he added: "I'd be surprised if a year from today Conrad Murray was still behind bars."

Still, Jackson fans were overjoyed. On the street outside the court, more than 100 of them whooped with joy and chanted "Thank you judge" as the verdict was read live on television.

"Of course it's not enough and it's not going to bring back Michael. But for two years, I had a project, justice for Michael Jackson, and I got what I wanted," Brenklin said.

Prosecutors were required to prove only that Murray was reckless in his care. The judge told jurors the doctor could be found guilty even if the jury believed Jackson gave himself the propofol, as long as such a possibility was foreseeable.

"The prosecution did a great job of creating a portrait (of Murray) that asked 'Is this how someone would have acted if he was responsible?'" said Marcellus McRae, a former federal prosecutor who is now a trial lawyer with the New York-based law firm Gibson Dunn.