Band in a rush: Metallica aims to beat euro crisis 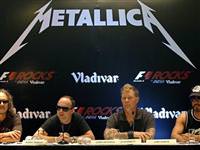 Heavy metal titans Metallica could have visited Europe in 2012 or 2013. A look at the euro crisis was enough to make up their minds -- the sooner the better.

The U.S. band whose hits include "Master of Puppets" and "Enter Sandman" has committed to six dates on what it calls its "European Summer Vacation," taking in Norway, Germany, Denmark, England and Austria during May and June next year.

"In the case of Metallica we are going to play two weeks' worth of gigs in 2012 that we probably could have played at any time," band manager Peter Mensch said.

"But (we) feared that we would be losing ... money on the table by waiting," he told Reuters in a telephone interview.

Managers often take economic factors into account when deciding when and where an act should play, Mensch explained, and Metallica's decision on Europe was no exception.

A tour costs millions of dollars to stage, and the outlays in Europe can be 30-40 percent higher than those in the United States, making sound financial decisions even more important.

European music fans need not panic yet -- most major acts will continue to play the region due to its economic and cultural importance.

But a crowd that was once 52,000 may shrink to, say, 45,000, and ticket prices may have to be slashed to reflect people's reduced spending power, Mensch warned.

Metallica's concerns underline how seriously investors are taking the European debt crisis and the impact it has on the single currency, which in the case of the music business could affect the ability of promoters to pay.

Managers can decide how much of a group's fees they want to receive in dollars or euros, potentially limiting losses.

But overall, expectations are being lowered for touring in Europe. The issue is an important one for performers, who have come to rely heavily on live show revenues as recorded music sales dry up.

"I think it's tougher but it (Europe) is still a monolithic market and we'll just keep trying to come over probably with slightly less expectations of the tremendous financial success we had before," Mensch said.

Although the group was always expected to play in the region next summer, demand in some markets has been weaker than in the past, reflecting broader economic woes.

"I've left some countries off," Mensch said. "It's because right now the offers haven't been good enough or there's no interest at all."

Managers have to consider not only a band's appearance fees, but also how many people are likely to turn up -- a half empty stadium may not be the musicians' fault, but it could seriously dent their image.

They are also aware that if a group stays away from the festival circuit for too long it could lose its fan base.

As in any other business, the general philosophy for managers is simple, however far removed it may sound from the spirit of rock 'n' roll -- follow the money. Australia and Brazil, Mensch said, look good bets at the moment.

Smaller, up-and-coming acts will tend to suffer more than established ones in the current economic climate, although management companies may decide to foot the bill for a loss-making tour as an investment in the future.

At the other end of the scale, a handful of artists can ride just about any economic crisis.

"All of this is mixed in with how hot you are," said Mensch.

"If you are (British chart-topper) Adele and you go on tour you could go to war-torn Afghanistan and sell more tickets than anybody else, so there are some acts who are completely bullet proof."