Vast Titanic collection to be sold off in one lot 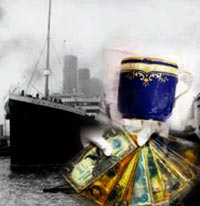 The biggest collection of Titanic artifacts is to be sold off as a single lot in an auction timed for the 100th anniversary in April of the sinking of the famed ocean liner.

The 5,500 item collection, valued in 2007 at $189 million, was recovered from seven research and recovery expeditions to the Titanic wreck site in the North Atlantic Ocean between 1987 and 2004, according to a filing with the U.S. Securities and Exchange Commision.

The seller is the Titanic's court-appointed salvor, Premier Exhibitions, a museum exhibition company, whose subsidiary RMS Titanic Inc. is the only company permitted by law to recover objects from the Titanic, the filing said.

The items, which were not identified in the filing, will be sold as a complete collection and offered for sale as one lot by Guernsey's Auctioneers in New York.

"We expect to identify a buyer capable of serving as a proper steward of the collection and the wreck site, while continuing to build upon the work that RMST and its partners in the oceanographic and archeological communities have accomplished," Christopher Davino, president of RMS Titanic, said in the December 23 filing.

Applications will be considered up until April 1 and accepted bidders will participate at an April 15 auction at a so far undisclosed New York venue, the filing said.

A spokeswoman for Guernsey's declined comment on Thursday but said an auction preview would be held next week in New York.

The auction must be approved by a federal court judge in Virginia, which ultimately controls whether any buyer will be an acceptable steward of the collection and wreck site, the filing said.

The auction is one of several events marking the 100th anniversary of the doomed passenger liner that set sail from England on April 10, 1912 and sank in the North Atlantic after hitting an iceberg and sinking five days later. It resulted in the deaths of 1,517 people.

The acclaimed Hollywood epic "Titanic" -- the second biggest box-office film of all time after "Avatar" -- will reach movie theaters worldwide in a 3D version in early April.