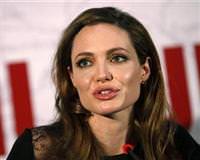 Famous American actress Angelina Jolie’s directorial debut In the Land of Blood and Honey screened in Sarajevo on Tuesday night.

Jolie film premiere was held at the Zetra Sports Center in Bosnia Herzegovina with an audience of over 5,000 including war victims.

The film tells the story of what happens after a Bosnian girl named Ayla finds herself in a concentration camp run by a Serb Danijel who she was romantically involved with prior to the war.

Jolie made an opening address prior to the showing in which she greeted the audience in Bosnian, and thanked them for being there. Jolie said that she didn't want to solely depict a painful time in Bosnian history, but she also wanted portray what a wonderful country it is.

Jolie welled up with emotions after the showing and could hardly speak; she was accompanied by her partner Brad Pitt.