Atv shows viewed all over the globe 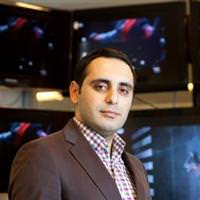 With around 2,000 hours of original programming produced each year, ATV has a "pioneer outlook" on the current market and is at the forefront of the "Turkish drama boom", as its content sales deputy manager, Ziyad Varol, told ttv.

Ziyad Varol: "Our Programs are Sold in Over 60 Countries"

As part of Turkey's "drama boom", ATV -owned by Turkuvaz Media Group- follows the current high quality drama production trend; and the company doesn't stop there. On the contrary, its growing international catalog also includes formats and various TV genres that enter the international arena as a result of the channel's daily endeavors in the local market.

"The channel is known for its enthralling dramas, hilarious comedies, action-packed series and engaging sitcoms, all of which are produced in the highest quality. With a creative and pioneering approach, ATV successfully produces many unique and original programs, bringing an array of fabulous stories and first rate actors to the TV screen," Ziyad Varol, ATV's Content Sales deputy manager, says.

ATV currently produces around 2,000 hours of original programming including TV series, daily shows, lifestyle-entertainment and current affairs programs. However, overlooking the drama genre in Turkey can be quite dangerous.

"Drama stands at the core of the TV industry in Turkey, especially for mainstream channels and independent production houses," he explains. Also, the executive recognizes the industry's efforts as a whole and assures "all players deserve to be applauded" for their intense work and for succeeding in enhancing the Turkish audiovisual production quality standards. "We are proud to be part of this achievement," Varol says.

INTERNATIONAL TURKEY
Obviously, the local drama prominence is also reflected on the international demand for Turkish series. Yet, the executive believes in content diversification, as other kinds of content also produced in the country are having good performances overseas. "Based on the sales figures, the most popular genre appears to be drama. However, action and dramedy are also the types of genres people show interest in during international markets. If you take a look at ATV's catalog you will also see two formats which have been very successful in Turkey; Match&Marry and Straight Forward.

When Turkey's drama boom was just emerging, ATV's titles were only distributed to the Middle East. "However, there are already over 60 countries buying Turkish programs," he states. The Middle East, Balkans, Ex-Yugoslavian countries, Transcaucasia, Post-Soviet states and Eastern Europe are amongst the main buyers. "Nevertheless, it's not a dream to expect Turkish titles to find slots in major European countries, India, Japan or even America in the future, either as taped content or formats. In the past, no one could anticipate the role that Turkish products are currently playing in the global TV market."

BRAND NEW TRIO
In recent months, ATV has launched three new titles which, according to Ziyad Varol, have been successful in the local market and have also captured the attention of international buyers: TV series Life Goes On, The End and The Cliff. "From one of the most famous directors in Turkey, Mahsun Kirmizigul, Life Goes On draws attention to early marriage incidents that are still common in many regions in the world and portrays the dramatic life of a 15-years-old girl who is forced to marry a 70 year old man," he says. In addition, all 25 episodes of The End have made an impact as "one of the most unique TV projects in the Turkish TV history;" and The Cliff tells "the story of a woman coming to Turkey with her sister with the hope of working as a nanny. She manages to escape from the trap she falls into at the last moment".

Lastly, Varol shares his outlook on DISCOP Istanbul, a local event for ATV to test the market and the strength of its presence in the region: "It's a small market, but we are glad to have an event like this taking place in Turkey. It was definitely a right decision to organize said market in Istanbul where the heart of globally popular Turkish drama beats. We find it a tailored market where all potential clients assemble".