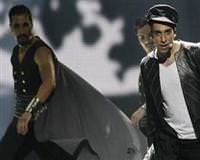 Tonight the Second Semi-Final of the 2012 Eurovision Song Contest will be broadcasted live from the Crystal Hall in Baku, Azerbaijan, where 18 countries will compete for just 10 places in the Grand Final.

The dress rehearsal for the 57th Eurovision song Contest Second Semi-Final was held last night in Azerbaijan and Turkey's representative Can Bonomo performed his song 'Love Me Back'.
Organized by the Organisation generale des Amateurs de l'Eurovision (OGAE) and attended by members of the press, last night's results have brought Turkey's representative Can Bonomo up to the top of the list for the Second Semi-Final group.

Can Bonomo was in third place, following Sweden and Serbia the night prior while the First Semi-Finals were being held. Bonomo, who has since made the top of the list, performs tonight for the Second Semi-Final of the 2012 Eurovision Song Contest.

Tonight's performances will take place in the following order:

The final for the 57th Eurovision Song Contest will be held on May 26th. Ten countries each will be selected form the First and Second Semi-Finals, while nations England, France, Italy, Spain, Germany and hosts Azerbaijan ahev earned the right to automatically compete in the finals.