'The Harem is the home of the sultan’ 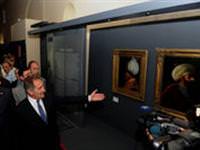 The Harem-i Hümayunu or the Imperial Harem Exhibit opened the day before yesterday at Topkapı Palace. Minister of Culture Ertuğrul Günay states that they hope the exhibit will help correct any false impressions of the Harem. Prof. Ortaylı states, “Let’s not forget that first and foremost, the Harem was the sultan’s home.”

The exhibit, fully titled "Padişahın Evi: Topkapı Sarayı Harem-i Hümayunu Sergisi" opened yesterday in the Has Ahır section of Topkapı Palace. A number of invitees came out for the opening, including Minister of Culture and Tourism Ertuğrul Günay, Minister of National Defense İsmet Yılmaz and Fener Greek Patriarch Bartholomeos.

Günay mentioned that the recent popularity of the Harem has lead to the development of false impressions, which he states they hope to rectify. Minister Günay explains that this exhibition will depict symbolic examples of the discipline and teachings that took place in the Harem.

FATİH COMMISSIONED THE BUILDING OF THE HAREM

Topkapı Palace Museum Chairman Prof. Dr. İlber Ortaylı explains that Topkapı Sarayı was commissioned by Fatih Sultan Mehmet, however the Harem was built upon the request of Hürrem Sultan the wife of Suleyman the Magnificent. "The Harem is the sole gift and legacy of the Topkapı Palace that remains from Sinan the Architect. It need not be forgotten that first and foremost, this was the sultan's home. It was a home with the most modest and disciplined lifestyle of all modern palaces."

EXHIBIT TO RUN UNTIL OCTOBER 15

The exhibit contains a variety of items used in the household as well as personal items, musical instruments and jewelry to name just a few of the extensive selection of pieces that will be on display. The exhibit, which opened on Tuesday, will run until October 15th.