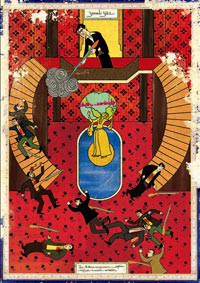 Murat Palta, a 22-year old graphic artist, is drawing in worldwide interest in his depictions of Hollywood movie scenes that have taken on cult status in the 16th Ottoman miniature art style.

Palta has recreated a number of classic scenes from films including 'Godfather', 'Scarface', 'Inception' and 'Star Wars' into historical Ottoman miniature paintings. Palta created the 11-piece project as his final thesis for the Dumlupınar University's Graphics Department; however since then he has been mentioned in a number of news portals in Spain and Japan, not to mention the United States highest clicked new site Huffington Post.

Palta's miniatures depict Marlon Brando in a kaftan as the 'Godfather', Pacino in 'Scarface' wearing a fez, Uma Thurman in 'Kill Bill' wearing a traditional Ottoman robe and 'Star Wars' Darth Vader smelling roses surrounded by Janissaries. Explaining that he first released these images on an internet humor website two years ago, Palta states, "I decided later to transform these images into my thesis. I finished and submitted the project two months ago then after I downloaded my work on the internet,I began to receive positive responses from all over the world."

Murat Palta explains that he started off by researching the Ottoman miniature artist Levni and digitally transferred a number of images from a variety of artists from the Tulip Era which he then began to trace on his own. "My preference was to study Levni because of his frequent use of female figures. My intentions were not just to blend the East and the West, but also to combine tradition with contemporary, which is something I wanted to prove was possible in the graphic arts."

The young artist went on to share that when he first started his drawings a number of people said he should focus on Turkish films rather than foreign films. However, Palta explains, that because he was interested in presenting an East-West synthesis this was not a route he chose to follow.
Expressing that a lot of times foreigners seem to not completely understand what miniature paintings are, Palta says, "Some confuse them with Indian or Persian miniatures. There have been others that have referred to them as 'Eastern Middle Ages illustrations' and others who call it 'Oriental Art'. In general however they seem to know what miniature paintings are."

Palta is currently working on a project in Toledo, Spain which intends to utilize a digital method of illustration to introduce the city to tourists. "If this project is realized, it will be quite a success," states Palta.

Commenting on some of the most interesting offers he has received this far, Murat Palta says, "A woman sent me a message from Dubai saying she wanted to buy my paintings. She didn't specify a price, which quite surprised me. I also received a very interesting offer from Miramax, the producers of films like Pulp Fiction and Kill Bill. They sent a proposal agreement stating they wanted to publish my work on their web site."

This is a translation of an article originally written by Ragıp Soylu. 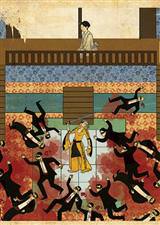