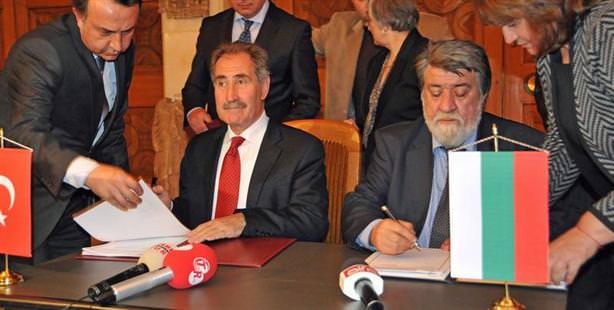 Minister of Culture and Tourism Ertuğrul Günay has announced that 19 historical artifacts belonging to Turkey will be returned by Bulgaria.

The protocol on the return of the artifacts had been signed by Minister Günay and his Bulgarian counterpart Minister Vezhdi Rashidov. Günay boarded a train to Bulgaria in order to personally return a number of the artifacts when he stopped for lunch in Edirne and spoke with members of the press.

Explaining that the protocol signed with Bulgaria involves the return of all artifacts taken out of the country, Günay stated that they were headed to Bulgaria to return a portion of the 19 artifacts found, and would be bringing back the remaining artifacts at a later date.

Noting that they are trying to work on the return of artifacts with all neighboring countries, Minister of Culture and Tourism Günay stated, "At present, there are 19 artifacts that will be returned. We will share details of what the artifacts are at a later date. We will also have good news to share after the New Year regarding additional artifacts. We are working with Greece, Bulgaria and a number of other nations. There were a number of artifacts that were illegally smuggled out of the country years ago. This collaboration will ease the process of returning these pieces. We also went to Serbia personally in order to return a number of artifacts to Turkey. The opening of the cultural center was also a significant step. Turkey is trying to recall all of its artifacts and restore them. We are hoping for the same care to detail to be paid by our neighbors. There are a number of examples within this framework with Bulgaria. We will share them. We will also be working in a mutual restoration project in the near future. We will be reaching negotiations on this issue as well," stated Günay.