"I arrived to Anatolia before even seeing Istanbul” 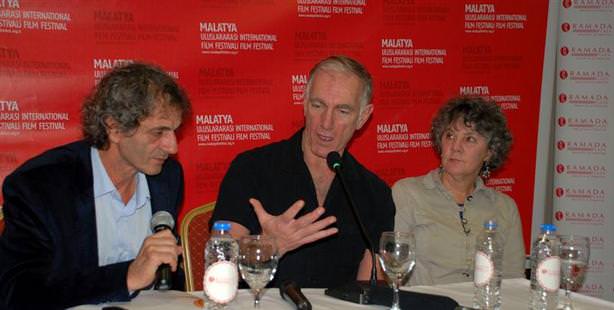 During his acceptance speech for an honorary lifetime achievement award at the Malatya Film Festival, United States director John Sayles stated, “I feel very lucky to be able to walk in one of the oldest settlements in the world and of the Hittite civilization.”

"It turns out it is possible to arrive to Anatolia before even seeing Istanbul," stated Sayles who enjoyed the local specialty of apricots as well as toured the region. John Sayles even paid a visit to the historical Mount Nemrut.

The director known for questioning heavy topics such as racism and imperialism depicted through stories of people's lives, the 62-year-old director answered questions that we presented him with from SABAH.

I SAW MALATYA FIRST: "It turns out it is possible to arrive to Anatolia before even seeing Istanbul! When I told my friends I would be coming to Turkey, they were so thrilled I was going to get to see Istanbul and Cappadocia; in fact some were even jealous. Then when I said I would be going to Malatya, they were shocked. I feel very lucky to be able to walk in one of the oldest settlements in the world and of the Hittite civilization."

I DIDN'T CHOOSE TO BE INDEPENDENT: "I didn't choose to be independent. I ended up having to do my own films because Hollywood wouldn't give me money. It's even harder now to be independent. I make my earnings off of writing scripts for Hollywood and I find money for my movies. In this market, there is no guarantee whether you will or will not be able to make another film. Independent films may be hard, but I'm really lucky! I am grateful for my lot; I have filmed nearly 20 movies. Without making any concessions, I have been nominated for an Oscar twice."

POPCORN AND SODA: "Hollywood is not like it used to be! Investors are the ones running studios and everything is calculated according to the profit margin. There are only a few directors that are able to choose their cast or dictate how the movie is going to end. For example the Coen brothers… Just think, even Martin Scorsese has trouble putting his own signature at the end of a film! The biggest issue in Hollywood is the fact that the movie industry is a producer's industry and not a director's. There is hardly any creativity!

The profit made off of popcorn and soda is more than the price of a ticket at movie theaters. Be careful, it's easy to get caught up in the appeal of popular movies, however not everything is just fun."

This is a translation of an article originally written by Esin Küçüktepepınar.