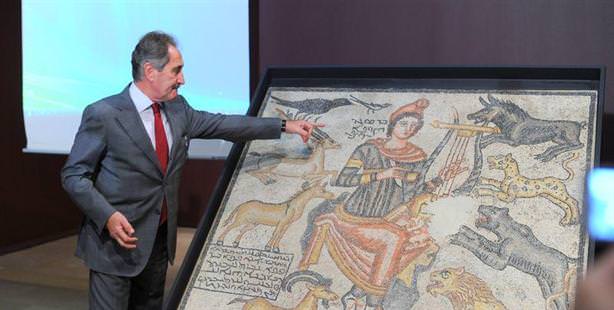 The Dallas Museum of Art has returned an Orpheus Mosaic panel to Turkey, as part of the Minister of Culture and Tourism’s efforts to reclaim the nation’s ancient artifacts that have been taken out of the country in years past.

The Orpheus Mosaic, which arrived in Turkey on December 6th, was introduced by Minister of Culture and Tourism Ertuğrul Günay at the Istanbul Archeology Museum on Saturday. The piece will continue to be on display at the Istanbul Archeological Museum until it is returned to its original home of Şanlıurfa, where it will be on permanent display once the Şanlıurfa Museum is completed.

The Orpheus Mosaic, which dates back to A.D.194, was taken out of Şanlıurfa's borders in 1998 only to be found in Texas in 1999 at an auction where the Dallas Art Museum purchased the piece for 85,000 dollars. After signing a memorandum of Understanding between Turkish and the Dallas Museum of Art officials, the museum volunteered the historical mosaic's return.

The mosaic, which is from the ancient Hellenistic city of Edessa, which is now current-day Şanlıurfa, is thought to have been part of a floor decoration. The mosaic depicts Orpheus taming wild animals.
Minister Günay pointed out that the piece is in practically perfect condition and the fact that it contains the artist's name is another important element. Günay also drew attention to the fact that the mosaic shows just how much care was put into decorating homes at that time, something, which he says we should all pay heed to.

Günay also thanked everyone who participated in the return of the historical piece and said, "We are trying to recover all of our artifacts that have left the country, of course there are also additional pieces we are currently pursuing."

The Memorandum of Understanding was signed between Turkish officials and the Dallas Museum of Art on December 3rd and the mosaic was brought to Turkey just three days later by Turkish Airlines sponsorship.

Calling the return of artifacts to their original nation an issue of ethics, Günay expressed that this is an issue they have been working feverously on in recent years, drawing up the example of the recent return of a statue of Hercules, which was brought back by Prime Minister Tayyip Erdoğan's plane.

Explaining that over the past five years alone, they have managed to recover nearly 4,000 artifacts, Günay states, ''I believe our efforts have contributed greatly to this momentum. Within the years 2002-2012, a total 4,113 artifacts were returned to Turkey, 3,697 of which have been recovered since 2007. The figures prove me right," said Günay.

Explaining that they are trying to recover the artifacts on a basis of diplomatic understanding, without going to court or paying extortionate fines, Günay says that these efforts have been influential in creating an important sensitivity to the issue throughout the region. "We are holding a number of meetings and reaching agreements with a variety of nations. Just recently, we went to Bulgaria and returned with 19 artifacts," stated Günay.