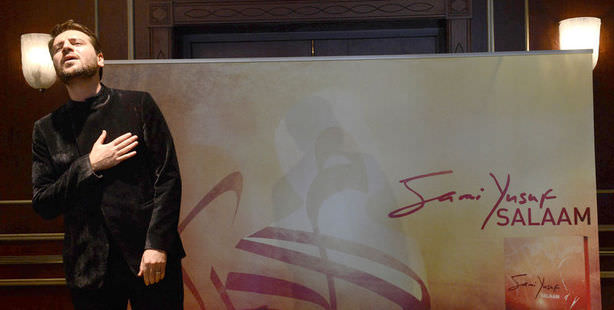 Sami Yusuf , a British singer-songwriter, composer and multi-instrumentalist musician of Azerbaijani origin introduced the release of his new album “Salaam” in Turkey.

Promoting the release of his new album at a news conference at a hotel in Beşiktaş, Sami Yusuf told reporters that although he is not saying that this album will change the world, "Let me just say this, from the very start I have always believed in celebrating peace, unity and our diversity and this album is an extension of this philosophy and my beliefs."

Yusuf expressed how important it was for him to be able to promote the Turkish version of the album in Istanbul at this time in which the world needs peace, love, solidarity, unity, familiarity with one another and compassion more than ever.

''I am happy to be in this country which shares this same message and where different ideas and beliefs co-exist and peace is palpable. My album does not contain any messages that are religious, dogmatic or that separate 'us from them'. There is an eternal and timeless message; of love, understanding, solidarity and unity. These are not solely the messages of Islam, these are also the values imprinted in the traditions of all of the world's great religions."

Yusuf explains that his new album 'Salaam' is "less arabesque" than his previous endeavors and describes this new effort as more of a "western and eastern synthesis."

Yusuf also revealed that the lyrics to the song entitled 'Dryer Land' was written by a Turkish fan. Yusuf explained that he saw the poem that became the lyrics to the song on the internet and really liked it and after gaining approval from those around him, he received permission from the poet İbrahim Tut to turn the poem into a song.

During the exclusive event, Yusuf later sat down to the piano and played certain parts of his songs in both Turkish and English. Yusuf also performed the song 'Salaam', for which the album was named after.

A MUSIC VIDEO PREMIERED IN ISTANBUL

During the meeting, Yusuf also played his new music video for the song 'Wherever You Are'. Yusuf said that this showing in Istanbul marked the international debut of the video, which was shot in California.
The Turkish release of Sami Yusuf's new album 'Salaam' contains 16 songs, five of which are sung in Turkish. The global version of the album was released at the end of 2012.