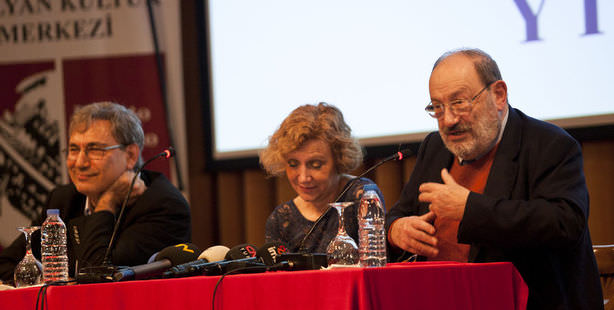 Italian writer Umberto Eco expressed that he does not like to be emotionally connected to his novels and therefore most of what he writes are history-based stories. "For example, I could never tell a love story. I would much prefer to write about Napoleon," said Eco.

Orhan Pamuk on the other hand explained that his novels always contain personal elements. When Pamuk commended the Italian novelist by saying, "Eco is a great writer. I have learned a lot from him," Eco responded by joking, "I can't repeat what he has just said, because that would be plagiarism."

Eco brought the audience to laughter when he said, "I believe that 50 percent of people are stupid. If I am ever convinced that they're are all stupid, well then I can die."

Famous writer Aziz Nesin, who passed away 1995, had also made a highly debated comment during his time, when he said, "Sixty percent of the public are stupid."

This is a translation of an article originally written by Mesut Altun.