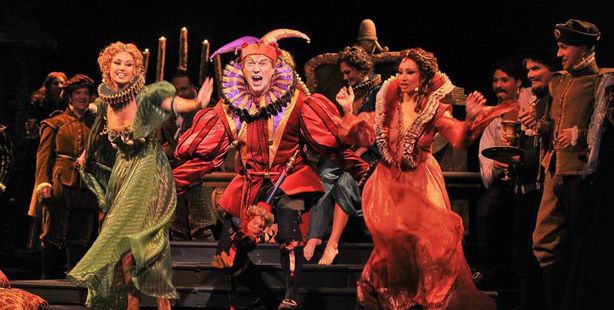 The 4th international Istanbul Opera Festival started on Tuesday with Giuseppe Verdi's 'Rigoletto' opera.
Although modernized, Rigoletto has remained close to its original version, says composer and libretto writer, head director of the State Opera and art director of the festival Yekta Kara.

"I transformed the peace to 1920's Napoli, while also remaining loyal to the original piece. Napoli was the center of the mafia world. It symbolized a culture of dominating men and women who were commoditized," said Kara.

The 'Yildirim Bayezid' opera will be on display in Istanbul's Sureyya Opera Hall between June 27-29.

The festival's gala concert 'Viva Verdi' will be on stage on July 1, led by maestro Roberto Abbado.

Samsun's directorate of state opera and ballet will be on stage on June 3-4, where two plays and W.A. Mozart's famous ' Il Seraglio' will be staged in Istanbul's Topkapi Palace.

Ali Hoca's 'Tulipmania', which was composed in memory of the 400th anniversary of Turkey-Netherlands relations, will be performed by Antalya's Directorate of State Opera and Ballet, which will take place on June 28 in Bahcesehir Culture and Art center.

The festival will end with IV. Murat's stage play on 7-8 July in Istanbul's Topkapi Palace.

Over the past four years, Istanbul has been hosting this international opera festival.

Within the international context, presenting Turkey's progress in the field of opera and art enables the local audience to see world famous opera performances and universally renowned artists. It serves the creativity of the youth and adds further initiatives both to the audience and to the artists.

Istanbul's trade and tourism will also be enlivened by emulating an international opera festival, most of which have become traditional in prestigious world cultural centers.