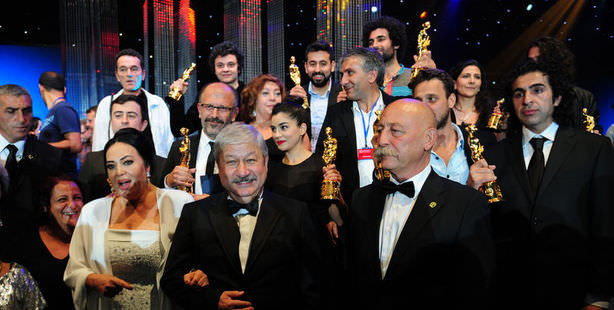 The 50th annual International Antalya Golden Orange Film Festival came to a close on Friday with a gala awards ceremony. Two films, Kusursuzlar" (Flawless Life) and "Cennetten Kovulmak (The Fall from Heaven), were awarded for ‘Best Picture’ in Turkey’s most prestigious film festival.

This year's Golden Orange award for Best Picture went to two winners "Kusursuzlar" (Flawless Life) and "Cennetten Kovulmak" (The Fall from Heaven) in Friday night's awards ceremony for the 50th annual International Antalya Golden Orange Film Festival, which for half a century now remains to be Turkey's most prestigious awards ceremony in the film industry. The film "Meryem" took home the highest number of awards Friday night.

The film "Meryem" was the biggest winner of the night, taking home five awards, including Best Actress for Zeynep Çamcı's performance and the award for Best Music. Best Actor went to Hakan Yufgacıgil for his role in "Uzun Yol" (Little Happiness).

The most emotional moment of last night's awards gala, which lasted two-and-a-half hours was when eight-year-old actress Rojin Tekin was unable to hold back her tears when she received a special jury award for her performance in "Cennetten Kovulmak" (The Fall from Heaven).

The following is a list of the winners of the 50th annual International Antalya Golden Orange Film festival: