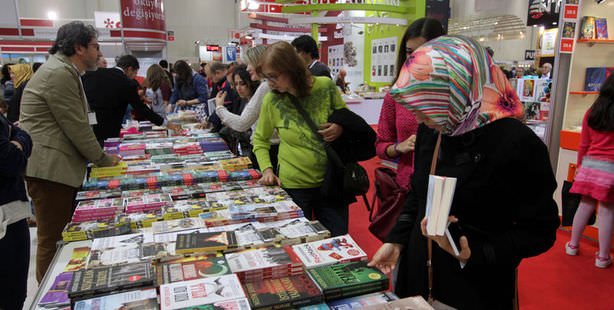 The International Istanbul Book Fair, which runs from November 2 to November 10, opened its doors to book lovers for the 32nd time over the weekend. Held at the Beylikdüzü Tüyap Fair and Convention Center, under this year's theme "History: The Future in the Past", the fair will host 690 publishing houses and NGO's as well as a significant number of exhibitions and hundreds of book signings. This year's festival boasts historian Prof. Dr. Taner Timur as its honorary writer and China as its special guest country.

This year's book fair will also be hosting a number of important exhibitions on topics including the Turkish-Greek population exchange, a photographic exhibition of 19th century Istanbul comprised of images by James Robertson as well as a special exhibit on the Piri Reis World Map as a commemoration of its 500th anniversary.

This year's International Istanbul Book Fair boasts a number of new exhibition halls including a digital publishing hall, e-book hall and Education and Source Texts Exam Preparation Hall. The hours have also been changed at this year's fair being held at Beylikdüzü's Tüyap. Weekdays the book fair will be open from 10:00 to 19:00, while on weekends the opening hours will remain the same as previous years, with doors opening from 10:00 to 20:00. On Sunday, November 10, the Istanbul International Book Fair will come to a close at 19:00. Also of note, the 32nd Istanbul Book Fair will be held concurrently with the 22nd Istanbul Art Fair-ARTIST 2013.