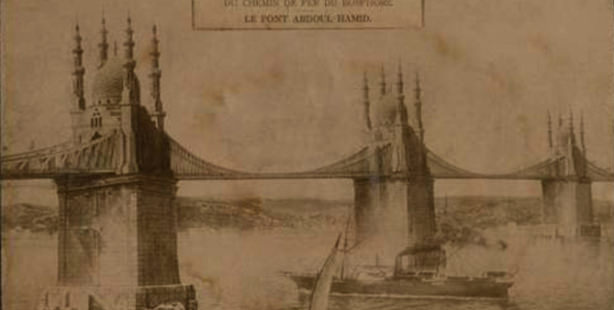 Grandiose engineering projects of Ottoman Empire era gathered together in a book.

The Marmaray Project, which opened to public use on Oct 29, with its resemblance to the Cisr-i Enbubi Project from Sultan Abdulhamid period, raised awareness regarding the engineering projects conceived during Ottoman era.

During the construction process of Marmaray, the Cisr-i Enbubi Project, an ancient version of the underwater tunnel was presented to the public in Istanbul and an important part of the communication of the project was based on this dream of several hundred years.

This rising awareness for engineering projects in the Ottoman Empire gave rise to a growing interest on the subject and a book featuring 41 intriguing projects is presented for the interest of researchers. The world's second subway project, "Metropolitan Railroad Projects", Golden Horn Bridge designs, Suez Channel sketches are only some of the many projects in the book. Some of the main projects are:

Cisr-i Enbubi Project: Main inspiration for the Marmaray Project, a tunnel under the Bosporus dating back to the Sultan Abdulhamid period is explained in detail. The primary object of the project was to connect the Sirkeci and Haydarpasa Stations.

Hippodrome Project: This project involved the demolition of Ibrahim Pasha Palace and the construction of a very large police directorate on the west of the Hippodrome (At Meydani). The 480 meter long E-shaped building was planned to resemble Bonvard's Palais de l'Industrie in Paris.

Golden Horn Bridge Project: One of the most interesting projects of Ottoman architecture history, the first Golden Horn Bridge, was designed by Leonardo da Vinci upon orders from Sultan Bayezid II. Da Vinci submitted the project to Bayezid II in 1503, but it is never put to life.

Subway: The project was submitted to the Ottoman government on Jul 2, 1868, but was initially rejected. After a long process, with the support of England, the world's second subway opened on January 1875. The tunnel is 554 meters in length and 4.90 meters in height with two railroads having two wagons each and two machinery rooms.
Last Update: Jan 08, 2014 3:55 pm
RELATED TOPICS