Eight years fighting domestic violence with the power of theater 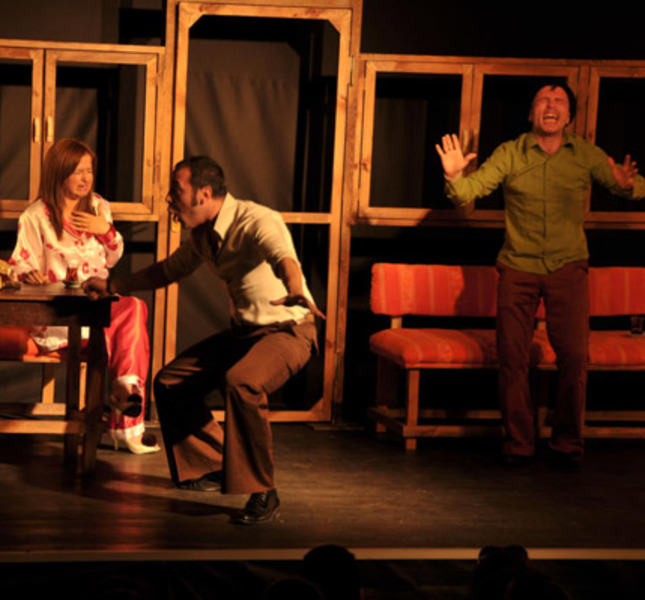 by Feb 25, 2014 12:00 am
Since 2006, the Düsevi theater group in Samsun has been using theater to draw attention to the widespread issue of violence against women in Turkey. The play is now one of the country's longest running theater productions.

The group's play, titled "Siddetin Gerçek Yüzü: 3. Sayfa Kadın Hikayeleri" (The Real Face of Violence: 3rd Page Women's Stories), has reached more than 40,000 people in the last eight years with performances in Istanbul, Ankara, Antalya and various south eastern provinces of Anatolia. "Unfortunately, domestic violence has been a major issue in the world and in our country as well. We wanted to contribute to this cause, and therefore we have performed the play for a long time; though I wish we didn't have to," the play's director, Cem Kaynar, said.

Düsevi is a local theater group in the province of Samsun on the Black Sea coast of Turkey. The play was inspired by stories of domestic violence that newspapers usually publish on page three. The play was written by eight different scenarists and is divided into sections, with titles such as "Honor Killings", "Mother", "Bridal Chamber", "Laz Daughter", titles all taken from page three headlines.
In an interview to Anadolu Agency (AA), Kaynar said the group began working on the play in 2005 and received great support from the Samsun Governorship and the Middle Black Sea Development Agency.
The play received more public acclaim than the producers and writers expected and has become one of the longest running local plays in Turkey.

Actress Ferda Kaynar noted that the play has become the voice of women who suffer domestic violence. "The play is significant because it encourages victims of domestic violence to take action; to make their voices heard. We also included in the script guidance on whom and where to apply to. There are six stories about women who have been subjected to domestic violence. The play doesn't give out any message in the end, we just try to ensure that they know they are not alone," said Kaynar. She further noted that she would like the play to be viewed by more males since their viewers are mostly women.