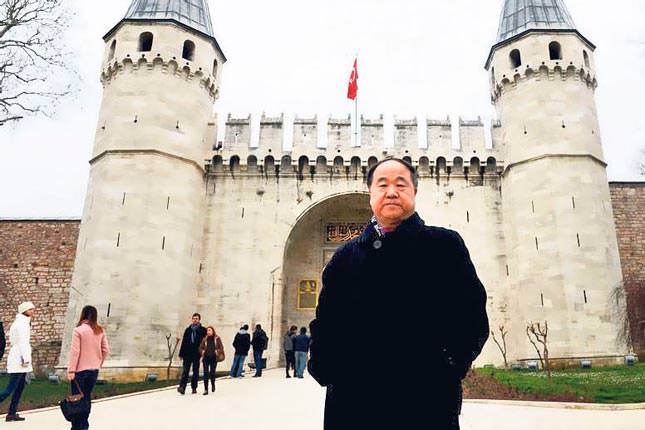 The "100 Chinese Intellectuals Project" welcomed China's 2012 Nobel laureate, Guan Moye, who announced he will use the world-renowned Hagia Sophia as an inspiration for his upcoming literary works

Nobel laureate Guan Moye, widely known by his pen name Mo Yan, arrived in Turkey's cultural capital, Istanbul, on Feb. 17 to hold meetings with high-ranking individuals from both the literary and political spheres. Mo Yan called on the Chinese and Turkish governments to ramp up their efforts to translate literary works between the two languages to increase cultural exchange and enable the people of both countries to develop a better understanding of each other's background, culture and current affairs.

The "100 Chinese Intellectuals" project, supported by the Ministry of Culture and Tourism, was organized as a part of the 2013 Turkish cultural year in China and marketed as the biggest project in the history of relations between the two countries. It has welcomed 94 intellectuals to date, with Mo Yan as the most acclaimed.

The acclaimed writer said interest in Turkey and its culture is on the rise in China.
Although he read books on Turkey and Istanbul before he arrived, the reality on the ground was much more impressive than he expected, especially in terms of the diversity of people and cultures. He also confessed that Turkey is a lot more developed than he had imagined.

Regarding the translation of literary works, Mo Yan noted he had difficulty finding Turkish literature translated into Chinese, with the exception of Orhan Pamuk's books. "Readingisakindofin-depth understanding by the people of different countries.," he said. "The main problem between the two countries is the lack of translated books."

Ömer Çelik, the Minister of Culture and Tourism, received Mo Yan at Topkapı Palace's Medjidie Kiosk. The minister praised Mo Yan's style and noted the significance of his books that touch on the daily lives of ordinary people. "There aren't many productive writers whose works give universal social messages," said Çelik.

Mo Yan also met the acclaimed Turkish writer Orhan Pamuk, who won the Nobel literature prize in 2006. The two met in Pamuk's house on Friday in a meeting closed to the press and exchanged their views on current literary issues. The two agreed to support translation of both countries' literary works.

In a statement to the press, Mo Yan said he found Istanbul's atmosphere fascinating. "The Hagia Sophia deeply influenced me.
It is an unbelievable piece of work, a unique document of history. I will consider including it in my future works," he said.

Built in the sixth century, the Hagia Sophia was used as a church during the Byzantine era and was turned into a mosque after the conquest of Istanbul in 1453. It currently serves as a public museum.

"You can feel the touch of history in every corner of the Hagia Sophia," said Mo Yan, adding he would like to use some of the war items kept in the military museum in Harbiye in his future books.

Mentioning that China has something similar to the janissary Mehter Band, Mo Yan said he was in love with Turkish food and said it resembles his mother's. "I had one of my pleasant times having fish off the street by the Bosporus and drinking Turkish tea," said Mo Yan. In addition to Mo Yan, Shan Zhiqiang, the editor-in-chief of Chinese National Geographic and Chen Huizhong, a prominent literary name in China was also among those who visited Turkey as part of the "100 Chinese Intellectuals Project."
Yan is known to western readers for his novel "Red Sorghum Clan," published in 1987. The volumes "Red Sorghum" and "Sorghum Wine" were later adapted for the film "Red Sorghum."

He was announced as the winner of the Nobel Prize in Literature in 2012 by the Swedish Academy, which described his work as "hallucinatory realism [that] merges folk tales, history and the contemporary." His style was praised by the head of the Swedish Academy, Peter Englund, at the time. The 109th recipient of the award, Mo Yan was the first resident of mainland China to ever receive the distinction. Winning the Nobel Prize also brought criticism along with support.
Mo Yan was harshly criticized by other famous Chinese writers such as Ma Jian for lack of commitment to social issues and also for his style, described as "coarse and predictable" by some.

Turkey and China have endeavored to increase cultural ties recently. China was the country of honor at the 32nd International Istanbul Book fair and the TÜYAP Fair and Convention Center in Büyükçekmece.