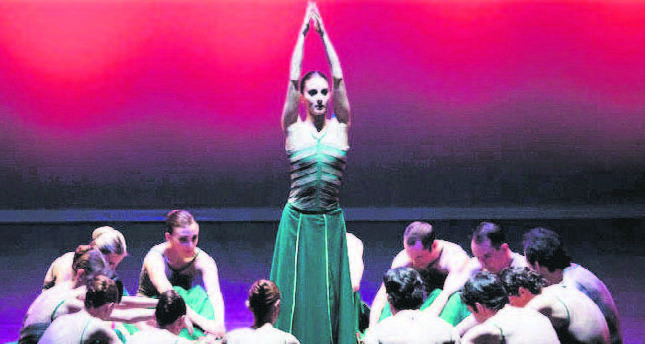 by daily sabah Mar 07, 2014 12:00 am
Istanbul - Turkey's State Opera and Ballet is beginning another busy season with four acclaimed international events scheduled for the spring and summer. Professor Rengim Gökmen, the general director of Turkey's State Opera and Ballet (DOB) has expressed his gratitude for art-lovers' patronage throughout the last season. DOB had its busiest season to date in 2013, thanks to the efforts of DOB's regional directorate across Turkey, said Gökmen.

On the heels of recent success, Guiseppe Verdi's opera, based on the 1809 play "Atilla, King of the Huns" by Zacharias Wener, premiered recently and Gökmen said the production will take to the road and perform at international festivals this year. The opera will be performed at the openings of both the International Istanbul Opera Festival and the International Aspendos Opera and Ballet Festival, the annual event held in the ancient Aspendos Theater near the Mediterranean province of Antalya. "We will present four great international shows in the summer.

Also, the International Istanbul Ballet Competition will be organized as a festival. That is why we are in a hurry to prepare for the summer," said Gökmen.

Gökmen also hailed the reconstruction of the Ankara Directorate of DOB in 2008, adding that the 2013-2014 season saw numerous full-house audiences there. He noted that Erdoğan Davran, the former Ankara DOB Director and Art Director, devotedly served the DOB, in addition to the current Director and Art Director of Ankara DOB, Aykut Çınar, who Gökmen said breathed new life into Ankara DOB through his artistic vision and management skills. "There is no such thing as amateur operas. You can probably do anything unprofessionally, apart from opera and ballet. They are supposed to be approached with conscious and meticulous planning.

In this sense, in Turkey, there is great appreciation for these art forms. I believe we should attach importance to the position of these performing arts and understand how this success was achieved in Turkey," said Gökmen.

The "Fourth Eskişehir Opera and Ballet Days" will be held between May 3 and 17, and the "Fifth International Istanbul Opera Festival" is scheduled to perform from June 3 to 17. The opening event of the Fifth International Istanbul Opera Festival will be the opera "Attila." The Salzburg State Opera in Austria will visit Turkey on June 14 and 15 to perform "Unexpected Meeting" as a guest of DOB. The star of the festival, baritone Dmitri Hvorostovsky will be on the stage for closing gala concert. The concert will be conducted by Chief Constantine Orbelian and accompanied by Istanbul State Opera and Ballet.

The "12th International Bodrum Ballet Festival" will be held from July 19 to Aug. 9. Carlos Saura's "Flamenco Hoy" will take the stage on July 23. The show is directed by the renowned Spanish filmmaker Carlos Saure.

The "21st International Aspendos Opera and Ballet Festival" was also included in the busy schedule from Aug. 30 to Sept. 20. "Attila" will open the festival, which will also host the Slovakian National Theater to perform "Romeo and Juliet." On Sept. 6 "Operetta Gala" of Budapest Operetta and Musical Theatre will meet the audience. Opera Society of Taormina Festival will perform the closing event with the opera "Tosca" by Puccini.