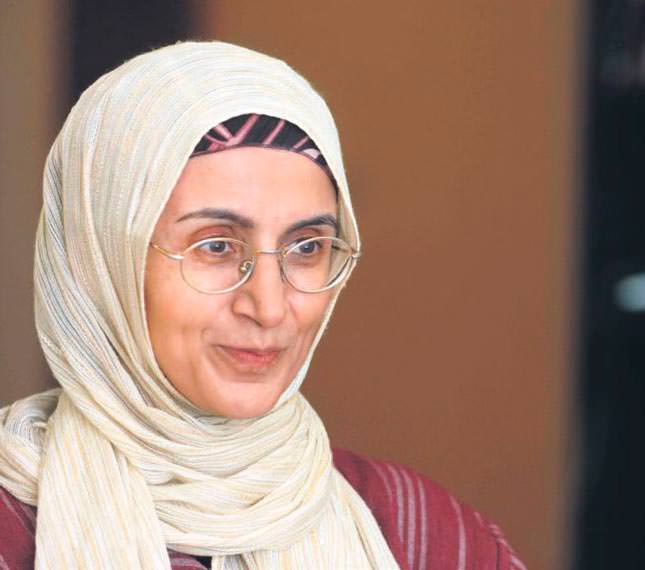 Although a page is not enough to summarize neither Cihan Aktaş's works nor her colorful personality, here's a look at one of the most talented novelists and storytellers in the current literary society of Turkey. With almost 30 books, Aktaş is also one of the hardest working Turkish novelists

Albert Einstein once said, "Genius is 1 percent talent and 99 percent hard work." By "genius," the famous Jewish physicist probably meant scientific intelligence. Yet, there's no obstacle to applying the same rule to artistic genius, too. If it's true, it may be the reason why we see some talented but lazy artists and many hard workers without any significant talent, while we can rarely spot real artists of genius.
Genius seems to remain rare even in eminent artistic environments.

Throughout my literary life, I have met many people who have a gift for writing. However, most of them failed to become successful writers since they neglected to work hard to keep their "shop" open.

According to Cemal Süreya, one of the major poets of the "Second New" movement of the 1950s, they used to say, "He closed his shop," about any poet who did not publish any work for a few months. Working does not make you a poet or a novelist, yet failing to work achieves nothing in any business.

Novelist and storywriter Aktaş is one of those talented, hard workers, who are in the minority in the current literary society of Turkey. I have been a reader of hers since her first short stories were published in the "Dergâh" monthly literary magazine in the early 1990s. And I have known her since 1996 when I was working as a co-editor in Dergâh under Mustafa Kutlu, a leader in Turkish short fiction for the last three decades.

A child of three coups

You can read a short, official biography of Aktaş in the first pages of her books or through a Google search, but it does not reflect the color or the deeper aspects of her life. This is not due to Muslim privacy, especially the privacy of a hijabwearing woman. It's because Aktaş has an autobiographical style of writing. She does not need to provide a long, detailed biography in prose. Her personality and life cannot be separated from her fiction. If you want to learn about her, you should go directly to her trilogy of novels and autobiographical short stories.

However, Aktaş does not merely write about herself; rather, she gives a social context from which you can derive some biographical information.

Most of the time, she uses a female character that has reached the climax of a longlasting problem. Relations and encounters with men, who generally represent authority of various kinds, have utmost importance concerning the nature of the problem. "Üç İhtilal Çocuğu" (A Child of Three Coups), her first collection of short stories, begins with a young, headscarf- wearing Muslim woman who has an encounter with a retired judge. The two confront each other on the street, and the problem, i.e. "othering," begins. The old man looks at the young woman in an insulting manner because she wears a headscarf. His gaze is compared to two penetrating arrows. Then he verbally insults the woman: "Look. What a disgrace. They grow everywhere like mushrooms. From where do they rise? Where do they come from?"

The judge here can also be read as an allegory of the tutelage regime of the old secular generation against the young Islamist generation of the 1980s. Indeed, the former cruelly judges the latter.

The historical fact is that the "judgment" of the tutelage regime was renewed with three coup d'états in 1960, 1971 and 1980. Thus, Aktaş's first collection of short stories conveys to the reader the word of the children of three coups.

This political sharpness is not typical in Aktaş's stories though. Indeed, her political writing precedes storytelling.

In the 1980s, Aktaş was a political newspaper columnist and also wrote several books on topics such as important Muslim women, including Fatima b. Muhammad and Zaynab b. Ali, exploitation of women, gender politics, politics of women's clothing and so on. These have been sharp questions in Turkey for a long time. On the other hand, Aktaş does not use a sharp tongue concerning these subjects.
She has a sociological concern with regard to the subject matters she has dealt with as a political writer. Her being political, I suppose, arises from her situation, i.e. as she wears a headscarf, she has had no opportunity not to be political.

I think Aktaş is a strong feminist in a minimalist sense. She never uses slogans. Nor does she draw a world only for women. Instead, she speaks as an esteemed gender-neutral member of Muslim society, but she generally discusses the questions, feelings, expectations, etc. of women. Since her style is a derived from impressionist fiction, she never speaks loudly. She doesn't define problems or solutions.
Aktaş never speaks as herself in the text. She does not use postmodern tricks of storytelling. Her style is radically modern. She is also a determined moralist.

"Write long letters to me"

She published a successive trilogy of autobiographical novels between 2002 and 2012. This last decade of Aktaş's writing has been led by these three novels.

These novels represent three ages with regard to the personal and in terms of Turkey politics. Her first novel, "Bana Uzun Mektuplar Yaz" (Write Long Letters to Me), tells of the childhood and early youth of a special female character, while taking the reader to the sociological and political depths of 1970s Turkey.

This novel, which I must confess is my favorite of the three, is half impressionist and half realist in style. There are two narrative modes in this novel. One is the first person narration, including frequent passages of stream of consciousness. And the other is a third person narration that tells us about the environment of the main character. I like to see "Bana Uzun Mektuplar Yaz" as the latest perfect shot in modern Turkish fiction.

The two subsequent novels, "Seni Dinleyen Biri" (A Good Listener) and "Sınıra Yakın" (Close to the Border), take us to the 1980s and 1990s, respectively. "Seni Dinleyen Biri" is about a group of female university students who try to give the world and life meaning. They think of and talk about everything from the economy to married life, from religion to friendship and so on. While reading this second novel, my attention was captured by the intimacy of the characters. According to my individual experience, male university students are not this intimate. They are much more success oriented — success in career, politics, religion, sex or whatever. Aktaş tells us that among educated young women, friendship is never broken by extrinsic values. It seems beautiful to me. The third novel is about thresholds. Characters are close to and between many things, e.g. national borders, the past and the present, and reality and insight. The mode in this novel is much more mature than that of the first two novels.

The trilogy may be seen as a work of mastery in contemporary art and literature by a talented, hardworking,
female Muslim writer.