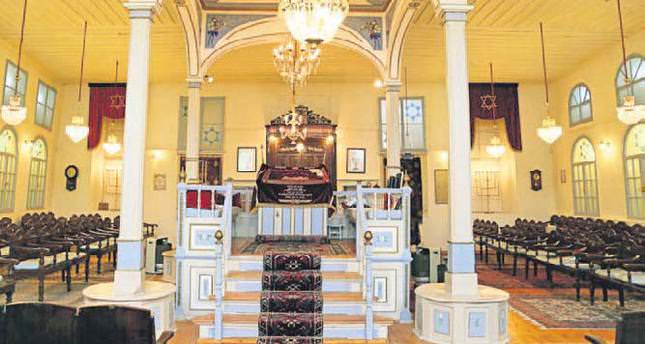 İZMİR – In line with recently passed regulations, the state is returning property, including 11 synagogues and two shops, to İzmir's Jewish Community Foundation.

Cemeteries and land were also amongst the properties that were returned to the İzmir-based foundation. The president of the İzmir Jewish Community Foundation, Sami Azar, gave a statement to Anadolu Agency (AA) stating that İzmir's Jewish community belongs to the Sephardic Jews who were expelled from Spain in 1492. Currently, there are about 17,000 to 18,000 Jews in total in Turkey and more than 2,000 Jews in İzmir from 350 families, said Azar.

The Law of Foundations came into effect in 1936; however, since the İzmir Jews did not apply for registration at that time, the İzmir Jewish Community Foundation was not accepted as a legal entity and therefore could not claim any rights with regard to the properties. However, with the recent amendments, the foundation became a legal entity on Dec. 13, 2011, and can now legally collect all properties, especially places of worship, within its structure. "The land and other properties that once belonged to the Jewish community now have no rightful official owners if you search the title deed office's registration records. The synagogues were marked as "sites of worship of the Jewish community," but without stating the official name of the owner. After we gained our legal entity status, we immediately applied to the General Directorate of Foundations," said Azar.

Following the registration of the foundation, the claim for restitution of 25 assets was submitted. The foundation so far has received the deeds to 15 properties, out of which 11 are synagogues, two are shops and one a plot and one a cemetery. Azar noted that they would use some of the properties they have gained the ownership of to promote İzmir, as they are part of İzmir's cultural heritage. While nine of the synagogues are located in İzmir's historical Kemeraltı bazaar district, five are set back to back, which might be the only location where such architectural design might be observed, said Azar.

Azar underlined the importance of synagogues to be located within the same historical site and said they need to take good advantage of this rare occurrence: "We have three synagogues in the same area in Prague, and although they are quite far away from each other, the area is a major attraction for faith tourism. For İzmir to have five synagogues means it has even greater potential, especially when all of the synagogues have been restored."

While three of the nine synagogues in the historical Kemeraltı bazaar are in good condition, six are abandoned. "We accept İzmir as Turkey's cultural heritage, and we will strive to save such important sites. We are considering implementing a major project. All synagogues cannot serve as places of worship both in terms of the cost and the number of people in our society. Therefore, we will restore three of the synagogues that are almost in ruins and about to collapse and open them to the public to serve as places of worship, a Jewish culture center, arts gallery and museum," said Azar.

A workshop will be organized in collaboration with authorities and experts from the Ministry of Culture and Tourism, local executives, related departments of universities and various local and foreign experts in May to determine a roadmap for the project and decide on which synagogue will be used for what purpose. The restoration and renovation work will take place accordingly afterwards. "A great deal of resources are required for the work," noted Azar, underlining the size and importance of the project.

However, he further stated that before the foundation became a legal entity, they were in contact with the Ministry of Culture and Tourism, and their projects were approved and backed. "We will apply both to obtain the support funds available in Turkey and abroad to realize this grand project," said Azar.