Italians and Turks unite over love of good food 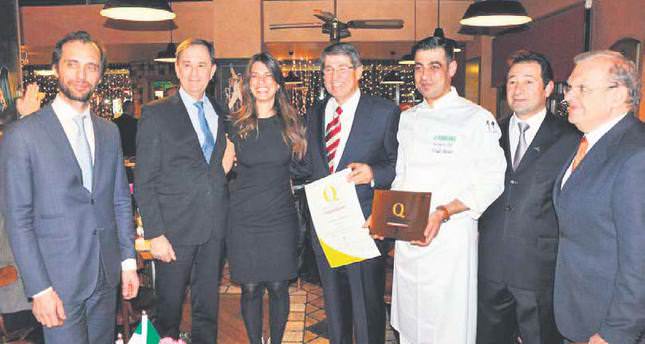 by Özlem Sakin Mar 21, 2014 12:00 am
ISTANBUL – If you see the "Ospitalita Italiana" seal on a restaurant's wall know this: you are in good hands. It means you are in a restaurant officially accredited as "an authentic Italian restaurant" by the Italian government itself. Last night, Ristorante il Padrino, located on Istanbul's upper-scale Bağdat Avenue, welcomed notable guests including Italian Ambassador Gianpalo Scarante and Turkey's Italian Chamber of Commerce Secretary-General Fatih Ayçin, along with many businessmen and members of the press.

The certification, which confirms that the restaurant has met strict criteria for the 2013-2014 season, was presented to restaurant owner, engineer-turned-restaurateur Erkan Öztamur by the Italian ambassador.

"I've lived abroad for so many years. I have tasted so many different cuisines, yet, it was Italian cuisine that appealed to me the most. As soon as I stepped foot back in Istanbul, I decided to set up an Italian restaurant and the opportunity to establish il Padrino came up. I believe the key to success was working with the same team for the past 24 years. We have become one big family here sharing a passion for Italian food," said Öztamur. Scarente while presenting the certificate stated, "This certificate is only awarded to those who deserve it. From nomination to selection, it is a very tough process.

The criteria are tough, the judges are tough as we, the Italian government back it and we can accept nothing less than perfection. Öztamur's restaurant is the first Italian restaurant to deserve this award in Turkey. One of the criteria is having personnel, preferably a chef, who is from, raised or trained in Italy. Another prerequisite is that the restaurant uses authentic Italian cheese and pasta imported from Italy. Further, the dishes should be made according to their original recipes," said Scarante.

Yet this is not all. To earn the certificate the restaurant must have at least one Italian- speaking staff member, correct Italian spelling on the menu, a menu comprising at least 51 percent genuine Italian recipes, a menu which describes and gives the "correct ingredients" of items on offer and states which region of Italy the ingredients are from and a wine list comprising at least 20 percent Italian wine. In addition the restaurant must use Italian olive oil (a prerequisite to participate) and present a written declaration that the products have been legally imported from Italy. These are just some of those "strict" criteria required in order to qualify.

Scarante also noted that the certification process had already started in other countries such as the U.S., Germany and England and that he was very pleased to see the same process being initiated in Turkey as he believes Turkey and Italy have strong cultural bonds.
He further highlighted both countries' love of food and said this was another opportunity to get to become accustomed to each other's culture and strengthen ties.

Following the ceremony the guests enjoyed a delicious meal including starters such as Bruschetta, Risotti ai Fruitti Di Mare or Risotti ai Funghi Porcini and finger licking good mains from Italian classics such as Penne All'Arabiata and Pizza Prosciutto to restaurant specialties Pizza il Padrino and Filetto Lokum. The night was concluded with a divine slice of Tiramisu.

The seal is one of the most prestigious awards offered by the Italian state. Launched to improve and promote Italy's "genuine" cuisine and food culture and to evaluate the condition of Italian restaurants outside Italy, the initiative also tries to create promotion opportunities and offer further events to promote Italian brands that operate outside of Italy.

The selected nominees are then presented to the Italian Certification Committee (CdC). In addition to receiving the certificate, certified restaurants will also be promoted by Premio Ospitalita and ISNART on their websites and bulletins.