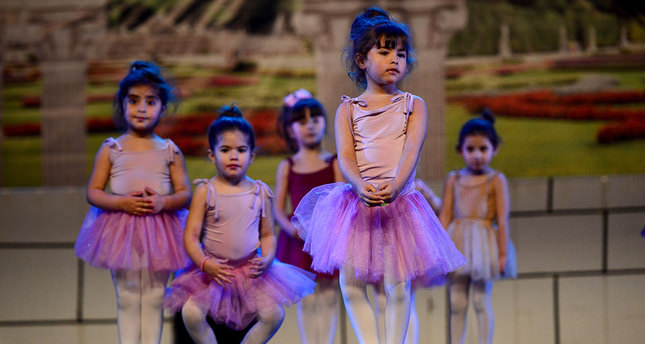 RAMALLAH — The Palestinian city of Ramallah in the West Bank hosted the enclave's first ballet performance featuring 55 Palestinian ballerinas aged 4-16, who performed a show about the Israeli wall that cuts through the occupied West Bank A witness to the ongoing conflict between Israeli security forces and Palestinians; this is the first ballet performance staged by Ramallah in its history. Organized by a private ballet opened two years ago in Ramallah, young ballerinas performed "The Ballet Prince on the Wall" at the Mahmut Derviş Culture Center.

The stage performance of the young ballerinas, aged four to 16, took place in front of a packed audience. At the end of the event, there was a presentation displaying photos of Palestinians standing at the barrier surrounding the West Bank. The photos represented their hopes and rebellion.

Following the presentation, the show ended when the little ballerinas kicked and took down a representation of the wall on stage. "We think that we have accomplished something beautiful with these 55 little ballerinas," said Syhrine Asad Ziadeh, both the founder of the ballet school and the trainer. "I did not expect to draw much attraction and was surprised to see a big crowd in the hall. I am not a professional ballerina. I started to perform ballet after I was trained by an American ballerina who came to Ramallah. Years later, I opened this private ballet school and our first performance took place two years after that. We have made history by staging the first ballet performance in Palestine," says Ziadeh.