"Sufism lies in the nature of art" 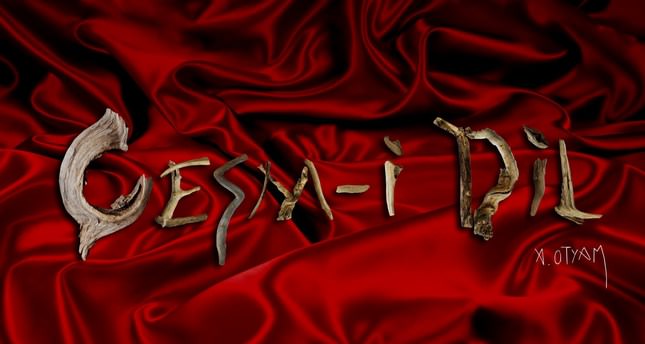 AO: I had previous works, but became famous with the soundtrack of "Yılan Hikayesi" (Endless Story). After this, I composed "Aşkım Aşkım" (My Honey), "Aşkım Dağlarda Gezer" (My Love as Great as the Mountains) and "Kınalı Kar" (Red Snow). The last two series starred two renowned Turkish singers, Özcan Deniz and Emrah, respectively. These series moved the Turkish TV sector into another dimension. This is because they were filmed using the techniques of movie photography.

Although you are involved in music, you surprised art lovers with your "Çeşm-i Dil" exhibition. What inspired you?

One of my friends said I may feel restricted while creating my work since they are only pieces of wood. Then I told him I earned my living from merely eight music notes for 40 years. We have endless nature in front of us and there is no possibility that it will all be consumed. My current job is not entirely different from my originalprofession. Previously, I composed music through notes. Currently, I create my compositions from natural wood. In other words, both music and wood art have a spirit. They have different approaches toward life, but are not distinct from each other.

When did "Çeşm-i Dil" first begin to develop?

Composing a soundtrack is an extremely stressful job. To relax myself, I generally prefer to walk along the beach and fill myself with the sounds of the sea. When I visited the Black Sea region, I found rather beautiful pieces of wood which washed ashore, worn out by waves. I collected many pieces of natural wood there. While I was collecting some other pieces, a friend's wife asked, "Are you going to make a barbecue tonight? Her words broke my heart. Here I was collecting these materials as beautiful pieces, others considered them useful for lighting the barbeque alone. At first, I dwelled upon what I could do with wood and started to write short prayers on them. I then realized they were saying something different. I regard them as the art of God. I felt as if I was a mediator between God and these pieces. They are such beautiful materials that I gathered them as if a child was playing with a puzzle. I bring the pieces together and ask people to try and look at life from this perspective. While listening to music, you lose yourself in different places and feelings. I felt the same when I was working on these pieces.

Were you inspired by Sufism while creating "Çeşm-i Dil"?

Yes, sure. As you may know, Sufism lies in the nature of art. Academic Ahmet Maden Görsel describes my work as visual Sufism. At first, I could not put my work in any category and asked myself "What is Çeşm-i Dil?"After Maden's description, I found its inner meaning. In other words, "Çeşm-i Dil" means visual Sufism.

Does it bear any similarity to calligraphy?

Yes, it is similar to calligraphy. When people see my works they first say it looks like calligraphy. I answer them, "Not at all!" The art of calligraphy is a life-long job and there are people who are masters at it. If I say my works are calligraphy, it would mean I disregard them. All I want is for people to look at the world from a different perspective and find beauty. The writing on my work is only a mediator; it is not in the forefront. All I can say is that I tr y to write as well as possible.

Were you inspired by the Ottoman Empire? Don't you think it's impossible not to be inspired by our own homeland?

You will see its traces at the center of Istanbul or any other place in Anatolia. There are many works around us left from the Ottomans. We grow up with their stories. When the fear of God turns into love, it would mean that everything is back on track. If you fear something, you cannot love it. However, if you love something, there is nothing to fear about it. This is what you find in "Çeşm-i Dil." You may experience the love of God and the respect toward the creatures of God. This approach is applied to everything around us just like humans, trees and flowers. I wanted to act as a mediator since you will find yourself in more inspiring places if you adopt this approach.

What do art enthusiasts say about your art?

The most important message of this exhibition, as "Çeşmi Dil" means the "eye of the heart," is that we should look at ever ything with our heart, always see beauty, see the beauty surrounding us all. When people see my work, they say they have never thought about things from this perspective. They even ask me whether the art is made of natural wood. I say yes and add that if you look at it, you will see the inner secret. Currently, my friends send me the most beautiful pieces of wood collected from nature. All people are aware of the power of nature, but they do not know how to use it.
Last Update: Mar 29, 2014 7:57 am
RELATED TOPICS